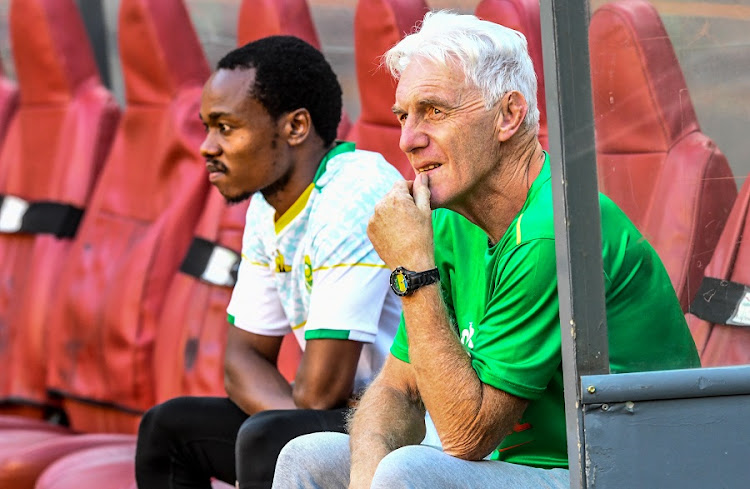 Bafana Bafana coach Hugo Broos has done wonders with the national side but saw his team crash out of the World Cup qualifiers on Sunday.
Image: GALLO IMAGES/ SYDNEY SESHIBEDI

Social media users were left angry and heartbroken on Sunday after Bafana Bafana’s World Cup dream came crashing down at the hands of Ghana.

A dubious penalty awarded by referee Maguette Ndiaye in the 31st minute decided the game. The Senegalese official decided Rushine De Reuck fouled Daniel Amartey inside the area when replays show there was barely contact between the two players.

As they jockeyed for position at Daniel-Kofi Kyereh’s cross, Amartey collapsed in apparent agony.

De Reuck was stunned by the penalty call and the yellow card that followed for his “foul”.

Ghana continued to pile on the pressure, in search of a second, and Bafana Bafana pushed back.

As Bafana looked for the elusive equaliser, mistakes crept in and gave Ghana more opportunities on the ball.

At the final whistle, Bafana players were devastated and De Reuck near inconsolable.

Social media was flooded with reactions to the loss, with many outraged by the “appalling” refereeing that “robbed” Bafana of a place in the next round.

They believed the young Bafana squad would grow from this, while some joked that Royal AM owner Shauwn  “MaMkhize” Mkhize should take over the national side.

The match officiating is appalling to say the least 🤢#GHARSA pic.twitter.com/CJfWzI7MZR

How was that a penalty? Disgrace @CAF_Online

...or else there’s won’t be any world cup for us anytime soon nje..😏

I’m not going to accept that defeat
🇿🇦
Bafana Bafana is the unluckiest nation when it comes to football. We were robbed #GHARSA #BafanaBafana pic.twitter.com/VW6Hk13bCE

#GHARSA
Brooks was wasteful, Hugo Broos was not decisive to substitute him.

If @BafanaBafana doesn't qualify, Match must be replayed. Same as the Senegal match that had to be replayed some time ago surely?

What a farce of a penalty given to Ghana...#GHARSA pic.twitter.com/enjUkcZRvq

Congratulations to the referee he was Ghana's most impressive player #GHARSA

@CAF_Online and you wonder why African football is the pits. What kind of a penalty is that between #GHARSA rubbish officiating, rubbish pitch and rubbish hospitality... We will be stuck in this mud for years to come if we don't change... pic.twitter.com/nS0ixhmuTt

We deserved to qualify because the boys worked really really hard tonight. The ref is the winner not Ghana. Hugo Bross and this young team made us believe again🇿🇦#GHARSA