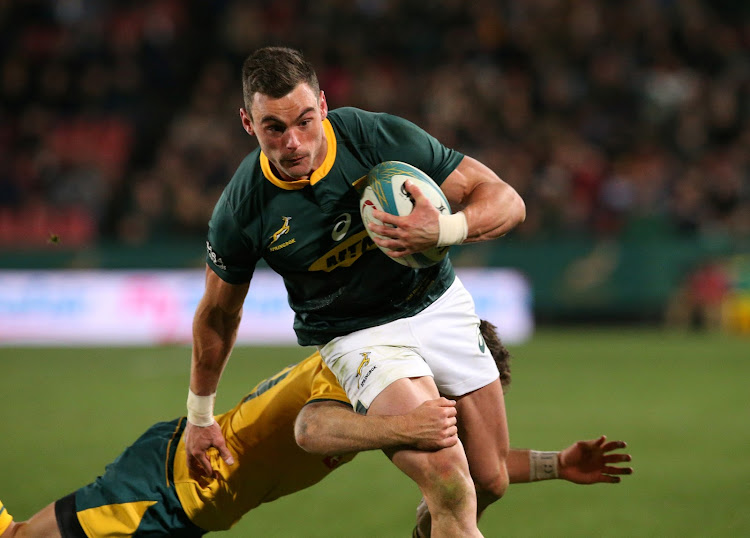 Springbok centre Jesse Kriel will continue to play on the wing against England.
Image: REUTERS/Mike Hutchings

Sbu Nkosi was considered for a berth at wing in the Springbok team for the match against England at Twickenham on Saturday, but coach Jacques Nienaber settled for Jesse Kriel.

Nkosi was a shoe-in to take over at right wing for the tour featuring matches against Wales, Scotland, and England after Cheslin Kolbe's injury, but he was stuck in SA with passport and visa issues.

Nkosi’s travel documents were sorted out, and he linked up with the Boks before the Scotland match, but Nienaber and the Bok think-tank settled on the plan to have outside centre Kriel at wing.

“There was a temptation to bring in a guy like Sbu Nkosi for this match; there was a discussion in getting him [Nkosi] back in the mix,” said Nienaber.

“Sbu joined us a little bit late because of his issues with his passport and travel documents, and I thought Jesse did well in the first game against Wales and he also made the step up in the second match against Scotland.

“Especially with all the different variations that Scotland can bring to the game in terms of their kicking and passing game, I thought Jesse did well, he had a solid performance.”

Nienaber added that on this tour they are looking at trying different combinations.

“For us, this end of year tour, we want to continue keeping momentum, and we also want to try a couple of things to build some experience for certain players and certain positions. We also want to build versatility, and that is the thinking around that.”

Nienaber also explained the reasoning behind replacing Elton Jantjies with Handrè Pollard in the starting line-up for the match against England.

“When we announced the team last week, we had certain internal goals and things that we wanted to try out at this end of year tour. We didn’t want to compromise or lose momentum.

“I thought Elton was outstanding last weekend and it is good to give him a start because of the way he trains, and he is really pushing hard. Handrè did well when he came on.

“Obviously, with Elton on the bench it gives us a little bit of versatility at the end of the game, depending on whether you are chasing or you are in control of the game.”