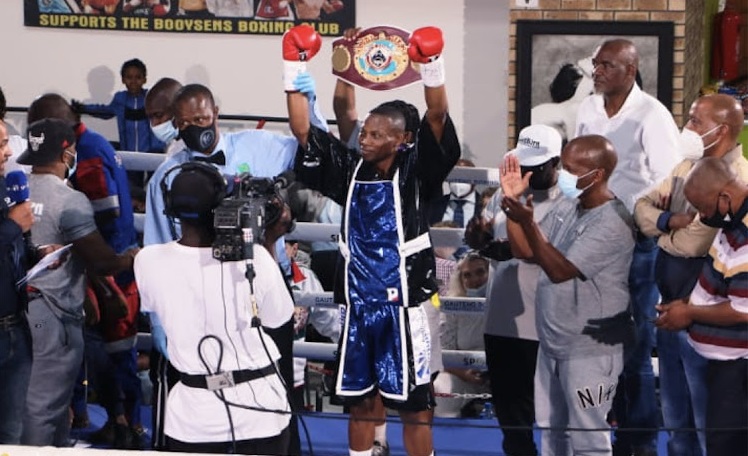 Zolani Tete celebrates after his win on Sunday.
Image: SUPPLIED

A large contingent of boxing fans, whose devotion to the fistic sport could not be reduced by the anxiety that is caused by the growing positive cases of Covid-19, turned the atmosphere at Booysens Gym into an electrifying one on Sunday.

They sang, danced and screamed their lungs out in appreciation of the conduct by boxers who performed at that venue that has become a home for boxing in the Gauteng. The tournament – impaired by some boxers pulling out due to positive Covid-19 cases few days before – was organised by the Gauteng Boxing Promoters Association through promoter Tshele Kometsi’s TK Boxing Promotions.

Mpontshane leaving nothing to chance

Mpontshane will vie for the fifth defence of the crown which he has yet to put at stake since April 2019.
Sport
5 months ago

It featured beloved Zolani “Last Born” Tete – the former WBF flyweight, IBF junior bantamweight and WBO bantamweight holder – who was making his comeback in a local ring since he had last fought in SA six years ago.

The actual significance about his fight was that it was his first since he lost the WBO belt in a third-round knockout to Johnriel Casimero in Birmingham in 2019.

Sadly, the fight – Tete's first in the junior featherweight division – ended even before it started. Some fans had not even settled on their seats when he unleashed a venomous straight left to the ribcage of Iddy Said Mustafa, sending him sagging down like a bag of mealies in 55 seconds. A punch on that area does not only cause severe pain, but it also sucks air out of the lungs. It was Tete’s 22nd KO in 29 wins against four losses.

“It’s called different levels and I had to make sure that I prove that I am a world-class fighter,” said Tete. “This was no lucky punch; I knew that once I make him feel my power, he would go. I am an elite fighter and I want to get back to where I belong, so there was no need to give out anything to my potential opponents. I am not apologetic of the quickness of the stoppage but somehow I feel for the fans who still wanted to see more of me.”

Fight promoter Joyce Kungwane, who was to organise the tournament under her TLB Promotions, confirmed the event had been called off.
Sport
5 months ago

Said, 23, suffered his fifth knockout in five losses against 13 wins.

In what was the best fight of the afternoon, Sibusiso Zingange and Prince Ndlovu wowed fans with everything they had in their arsenal, but in the end Zingange emerged victorious on points over six rounds.

John “Section 29” Bopape knocked out Congolese Bockson Bokasa in the second round. Three knockdowns in that round left referee Ben Ncapayi with no option but to exercise the ruling which is to end it all. Mark Farah outpointed Siya Mabena over six rounds.