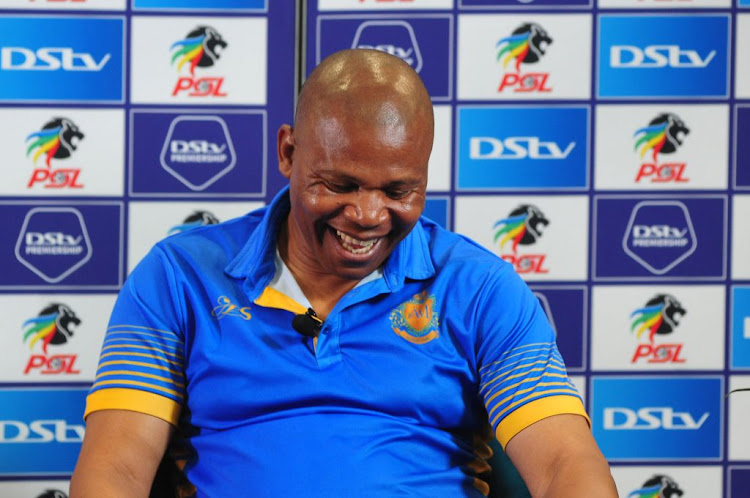 Royal AM coach John Maduka masterminded another win over Kaizer Chiefs to complete the double against the Johannesburg club
Image: Darren Stewart/Gallo Images

Royal  AM did the double over Kaizer Chiefs this season with a 1-0 home win at Chatsworth on Sunday as Victor Letsoalo’s first half penalty proved the difference between the two teams in their DStv Premiership clash.

It was not as convincing as the KwaZulu-Natal’s shock 4-1 win at Soccer City in mid-September, but it was another three points at the expense of Chiefs, propelling Shauwn Mkhize’s side into second place in the standings.

The penalty came from a clumsy challenge and was snapped up by Royal AM, whose defence was the busier of the two sides in a game played at high tempo, but where clear-cut chances were in short supply.

After a strong run earlier in the season, this was only a second victory in seven matches for Royal AM, but now sees them ahead of Stellenbosch FC in second place on goal difference but with a game in hand.

Chiefs, still without coach Stuart Baxter recovering from the Covid-19 virus, dropped to fourth in the standings.

They should have been ahead early when Keegan Dolly was fed by a superb long-range pass from Nkosingiphile Ngcobo. He squared for the onrushing Leonardo Castro, who slid the ball goalwards but it thundered against the upright and bounced back into the grateful arms of home keeper Patrick Nyame.

But it was a poor tackle from captain Bernard Parker that handed Royal AM a penalty eight minutes before the end of the first half. He hacked Zukile Mkhize from behind right in front of referee Luxolo Badi, who had no hesitation in awarding the penalty, which Letsoalo converted for his ninth goal of the league campaign.

Chiefs’ game plan revolved around looking for a searching pass through the heart of the Royal AM midfield, but they were often just out of reach.

Not even the introduction of Khama Billiat and Lebogang Manyama could change their fortunes, even though the pair were brought out with plenty of time still left.

Thato Lingwati, named man of the match, made a decisive tackle in the 69th minute to block Ngocbo’s effort as Parker also came rushing in, looking to finish.

But it was Royal AM who came closest to a second goal when Letsoalo crashed the ball against the crossbar in the 72nd minute, before having to go off after a cut to the cheek bone from an errant elbow from Daniel Cardoso.

Coach John Maduka was full of praise for their defensive effort afterwards and will now be looking to finish the year on a high note away at Baroka FC in Polokwane in midweek.