Tiger Woods has 'awesome' time in first round of PNC Championship 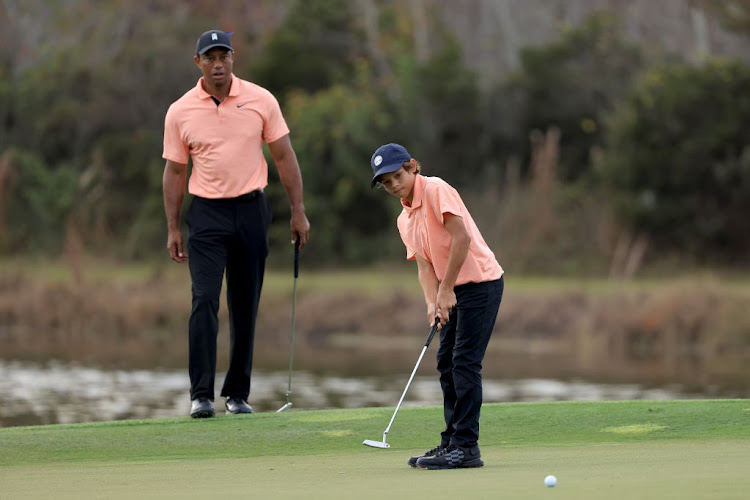 Charlie Woods plays a shot on the ninth hole as Tiger Woods looks on during the first round of the PNC Championship at the Ritz Carlton Golf Club Grande Lakes on December 18, 2021 in Orlando, Florida.
Image: Sam Greenwood/Getty Images

Tiger Woods and son Charlie are in the hunt after a strong showing during the first round of the PNC Championship.

Tiger and his son combined for a 10-under 62 on Saturday at the Ritz-Carlton Golf Club in Orlando. The duo is tied for fifth after a round that the 15-time Grand Slam champion termed “awesome.” Woods is playing for the first time since badly breaking his right leg 10 months ago in a single-car accident. He used a cart to navigate the course.

Competing again also shows Woods that there is a long way to go before he can even think about playing PGA Tour events. “I don't have endurance. I haven't played,” Woods said. “It's tiring out there, so it was a slow day.

Stuart Cink and his son Reagan are in the lead at 13-under 59. John Daly and his son John II and defending champions Justin Thomas and his father Mike are tied for second at 12 under while Vijay Singh and his son Qass are fourth at 11 under. Team Woods had 10 birdies during a bogey-free round using the scramble format. Charlie, age 12, certainly did his part in the strong showing.

“He loves competing,” Tiger said of Charlie. “Our whole family loves to compete at everything we do. This is an arena which he feels comfortable in and so do I.”

The Thomas family played with Woods and Justin said he was amazed over what he witnessed, particularly when Woods hit a shot from 220 yards out on the par-5, No. 3 and left it 8 feet from the hole .“That was just ridiculous,” Justin Thomas said.

“I looked at him and as soon as he sat in the cart, he just kind of looked at me and smiled. And I knew exactly that's the kind of shots that he hits when he's healthy.”

The Cinks had 11 birdies and an eagle on the par-5, No. 5 in the day's best showing. The 20-team event concludes Sunday.