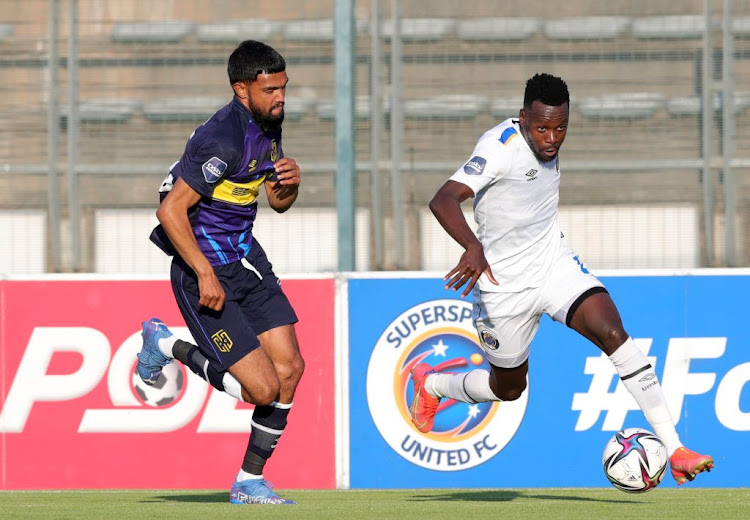 Gamphani Lungu of Supersport United is challenged by Keanu Cupido of Cape Town City during the league match between the two sides at Lucas Moripe Stadium in Pretoria.
Image: Samuel Shivambu/BackpagePix/Gallo Images

Supersport United delivered an early Christmas present to their supporters when the Pretoria side beat a 10-man Cape Town City in a five-goal thriller at the Lucas Moripe stadium on Wednesday evening.

It was a game that had it all — five goals, a red card, a penalty and a flurry of yellow cards - that eventually saw United win the engaging contest 3-2. United signalled their intentions very early in the game when Gamphani Lungu beat City goalkeeper Hugo Marques with a well-taken low shot in the ninth minute. It was a brilliant goal from Lungu, as after receiving a long ball from Onismor Bhasera he still had a lot to do and shrugged off the attention of a persistent Taariq Fielies before unleashing his strike.

Teboho Mokoena increased the lead with a crisp free kick at the edge of the area and gave Marques very little chance in the 27th minute. The Cape Town visitors received a lifeline early in the second half when Bhasera brought down the tricky Khanyisa Mayo inside the area and referee Victor Gomes awarded a penalty.

Fagrie Lakay made no mistake from the spot and beat United goalkeeper Ronwen Williams with a thunderous strike. The visitors were pushing for a second goal when Thabo Nodada was sent off in the 54th minute after receiving a second yellow card.

City finally managed to draw level in the 72nd minute when Kegan Johannes beat his own goalkeeper Williams with a header. Johannes redeemed himself when he scored the winner 10 minutes from full time to give the Pretoria side all the points.