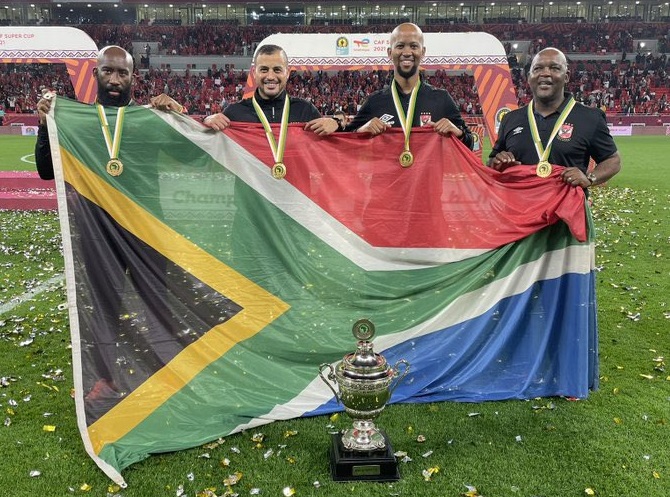 Percy Tau, who lifted his first trophy for the Red Devils, laid on the pass at Ahmed bin Ali Stadium in Al Rayyan for substitute Taher Mohamed’s dramatic 90th-minute equaliser to make the score 1-1 and send the game to penalties. Ahly had trailed for most of the game after Yasser Ibrahim put Raja ahead in the 13th minute.

The International Federation of Football History and Statistics has named Al Ahly head coach Pitso Mosimane the best club coach in Africa for 2021.
Sport
1 month ago

Jose is the coach who has won the all-time most Super Cups — the trophy contested between the Champions League and Confederation Cup winners — with four, all at Ahly. Mosimane stands alone in second place on three, having also won the trophy with Mamelodi Sundowns in 2017.

“I feel good. I must first thank the players because they are the ones who played,” Mosimane said in his post-match television interview.

“We did practise penalties, and we took them the same way we had practised.

“I must thank my players, my technical team, and the supporters.

“I must thank Captain Bibo [Ahly president Mahmoud El Khatib] and his board for their trust in me.”

A phenomenal @CAFCLCC campaign! It was a final like no other but we are proud of what our team has accomplished. Champions again!

Mosimane said Raja might have got more from the game had they not resorted to delaying tactics.

“It’s always tough. We thought it would be,” the coach said.

“I think if Raja could have played more, they had a chance to win. But they played to delay the game and sit on the floor.

“But we are a good team, we are Al Ahly, we have the spirit.”

Mosimane steered Ahly to their first title in seven years in the trophy they covet most in the 2019-20 Champions League, which he defended in 2020-21. Apart from the two Super Cups, he has also won the 2020 Egyptian Cup at the club he joined from Sundowns in September 2019.