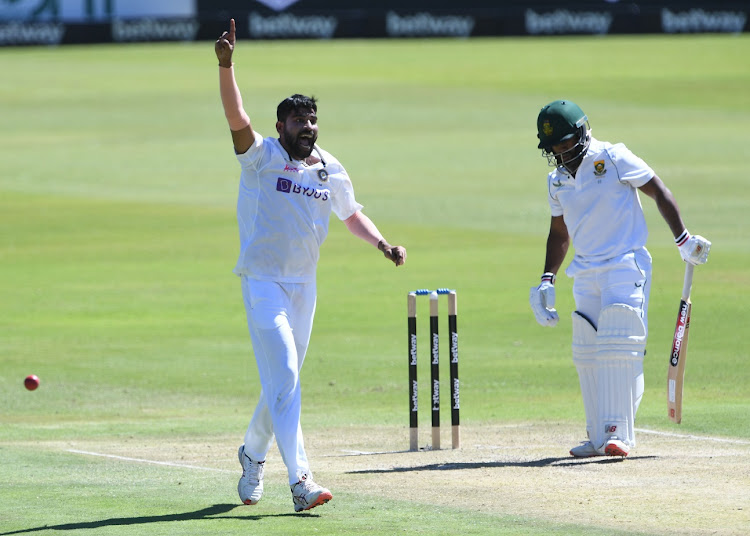 Mohammed Siraj of India appeals on day 3 of the first Test against South Africa at SuperSport Park in Centurion on December 28 2021.
Image: Lee Warren/Gallo Images

SA lost four crucial middle order wickets during the second session as they struggled to cope with India’s seam movement and occasional swing on the third day of the first Test at SuperSport Park in Centurion.

When umpires called tea, the Proteas were struggling on 109/5 with Temba Bavuma on 32 and Wiaan Mulder on 4 and still trailing India by 218 runs.

Trouble started for the Proteas when they lost Petersen, Markram and Van der Dussen in the space of seven balls after lunch and they never recovered as India continued to dictate terms.

Mohammed Shami started the demolition job by removing Petersen (15) and Markram (13) to join captain Dean Elgar (1), who was dismissed before lunch.

After the dismissal of Petersen, India suffered an injury blow when fast bowler Jasprit Bumrah limped off the field having twisted his ankle, but he returned to the game before the tea break.

It could have got worse a few balls later but KL Rahul, who was positioned at third slip, could not hold on to an edged ball by De Kock off the bowling of Mohammed Siraj.

In the second session, Bavuma and De Kock (34) steadied the Proteas with a hard-fought partnership of 72 off 134 but their stand was broken when the latter was bowled by Thakur.

During the first session, Lungi Ngidi and Kagiso Rabada led the fight back as SA claimed seven wickets in 55 balls in a successful period of one-and-half hours.

India started day 3 on 272/3 but Ngidi, Rabada and debutant Marco Jansen ripped through their middle and lower order to bowl the visitors out for 327.

Ngidi was the pick of the Proteas bowlers with 6/71, followed by Rabada on 3/72, while there was a significant milestone for Jansen who claimed his maiden Test scalp with the wicket of Bumrah.