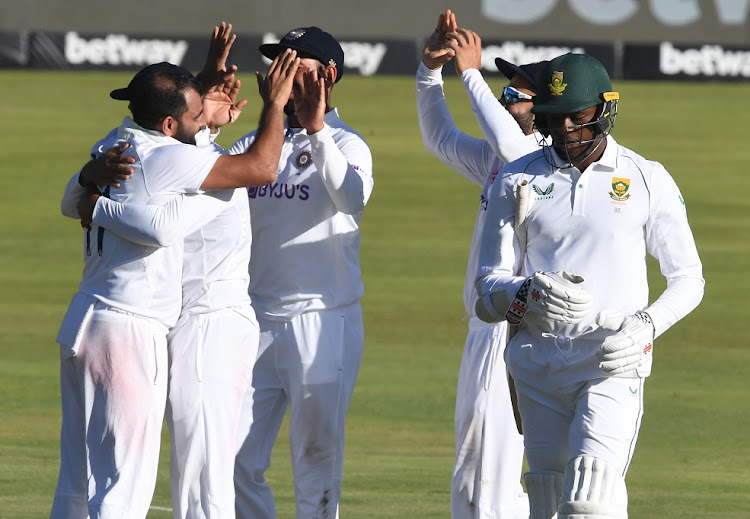 Mohammed Shami of India celebrates the wicket of Kagiso Rabada of the Proteas on day 3 of the first Test at SuperSport Park in Centurion on December 28 2021.
Image: Lee Warren/Gallo Images

After two completed days of Test cricket, India have maintained the upper hand over hosts SA in this intriguing Boxing Day Test that is unfolding at SuperSport Park in Centurion.

At the end of day 3 of the rain-affected Test, where a staggering 18 wickets fell on Tuesday, India were sitting on 16/1 in their second innings and a solid lead of 146 runs to show for their troubles.

Importantly for coach Rahul Dravid and captain Virat Kohli, they only lost the one second innings wicket of Mayank Agarwal (4), who was caught by Quinton de Kock from the bowling of Marco Jansen in the late stages of the third session.

They will resume with opener KL Rahul on 5 and Shardul Thakur on 4 and looking to lay a solid foundation for a victory that would give them a 1-0 lead in this three-match series.

India will be comforted by the fact that they still have capable top order batters in the form of Cheteshwar Pujara, Ajinkya Rahane, Kohli and Rishabh Pant in the bank.

If there is no declaration on Wednesday, Kagiso Rabada, Lungi Ngidi, Jansen, Wiaan Mulder and Keshav Maharaj will also have to deal with Ravichandran Ashwin, Shardul Thakur, Mohammed Shami, Jasprit Bumrah, Mohammed Siraj.

Lungi Ngidi and Kagiso Rabada bowled exceptionally upfront as SA claimed seven Indian wickets with 55 balls and in just over an hour on Tuesday ...
Sport
3 weeks ago

India ended their first innings on 327 with Rahul scoring his seventh century (123) and Agarwal (60) and Ajinkya Rahane (48) the other notable contributors to the scoreboard.

Ngidi was the star man with ball in hand as he returned a six-wicket haul while Rabada claimed three of his own and debutant Marco Jansen took the other one.

In reply, the Proteas were bowled out for 197 and still trailing by 130 with Temba Bavuma (52) and Kagiso Rabada (25) the only notable scorers as the familiar top-order collapse reared its ugly head again.

For India with the ball, Mohammed Shami was their top bowling performer as he claimed five wickets with Thakur and Jasprit Bumrah taking two each and Mohammed Siraj claiming the other.

SA lost four crucial middle order wickets during the second session as they struggled to cope with India’s seam movement and occasional swing on day ...
Sport
3 weeks ago

The Proteas’ first innings batting performance exposed familiar problems as there was only one notable partnership of 72 between Bavuma and Quinton de Kock.

The top order once again failed to come to the party as the top four batters — Dean Elgar, Aiden Markram, Keegan Petersen and Rassie van der Dussen — put up just 32 runs between them.

Bavuma and De Kock, who came in at five and six, were the only notable contributors to the scoreboard with respective scores of 52 and 34 in the middle.

With the batters having failed to cover themselves in glory, it is up to Rabada, Ngidi, Jansen, Mulder and Maharaj to try to restrict India from running away with this match on day 4.