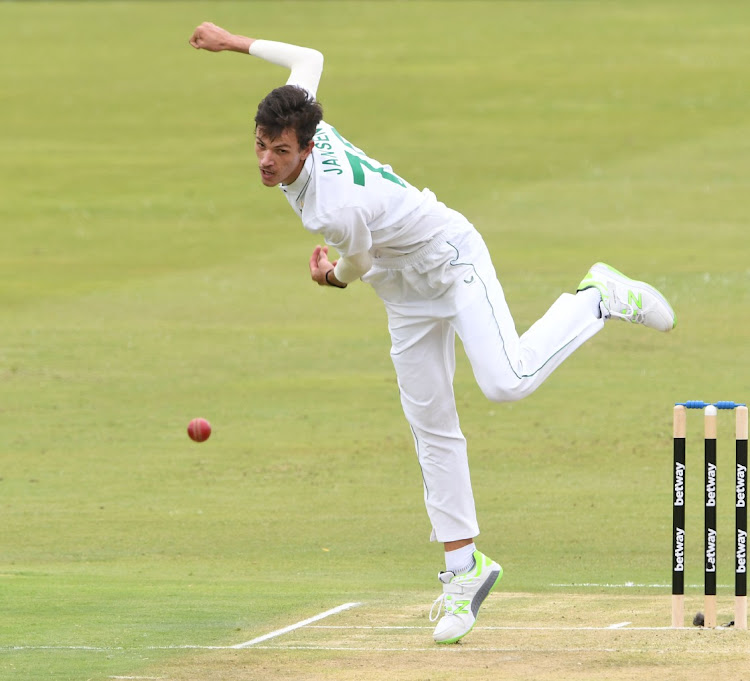 SELECTION QUESTIONED: Proteas seamer Marco Jansen during day one of the first Test against SA and India at SuperSport Park in Centurion on Sunday.
Image: GALLO IMAGES/ LEE WARREN

Proteas convener of selectors Victor Mpitsang on Monday lifted the veil of secrecy surrounding Duanne Olivier’s omission from the starting line-up for the first cricket Test against India which started at Centurion on Sunday.

Olivier was widely tipped to replace injured Anrich Nortjé and make a return to Test cricket against India, having last played for SA against Sri Lanka in 2019 before taking up a Kolpak contract with Yorkshire.

Instead, the selectors opted for 21-year-old left-arm quick Marco Jansen.

While the reasons for Nortje’s omission were explained earlier, there were none forthcoming for Olivier despite Mpitsang receiving requests for an explanation from the media on Sunday.

Rain has delayed the start of the second day of the Boxing Day Test at SuperSport Park in Centurion on Monday.
Sport
7 months ago

Olivier is the leading wicket-taker in SA’s domestic first-class competition, with 28 victims at fewer than 12 runs per victim, and Warriors fast bowler Jansen did not enjoy best of starts to the Test, but did show glimpses of promise.

However, that was not enough to quell a public backlash, questioning the merits of playing him ahead of Olivier, who was assumed to be fit for action.

On Monday, Mpitsang broke the silence, offering that Olivier had suffered lingering effects of having tested positive for Covid-19 and that he was also nursing a slight hamstring injury.

“Duanne Olivier is healthy and well, but did return a positive Covid-19 test result a number of weeks ago, which forced him to quarantine and took time away from his training ahead of the current Betway Test series against India,” Mpitsang said.

“This [Covid-19] did take place while he was away with the intention to spend time with his family and his work loads were not where the selection panel would have wanted them to be by the time he entered the team bubble ahead of the first Test match.

“He picked up a hamstring niggle during the two-day, inter-squad match at the start of the camp and the selectors did not want to risk him unnecessarily when there are two more Test matches to think about.”

SA will hope to be at the crease at some stage on the second day of the first Test against India at SuperSport Park on Monday, a ground where they ...
Sport
7 months ago

Some will ask why the transparency did not come on Sunday to set the public’s mind at ease and nip speculation and criticism in the bud.

Others will also question the validity of the explanation.

“Statistically, Marco Jansen was the standout performer with the ball against India A in their recent tour to SA and the selectors backed him to take on the senior India team and do well,” Mpitsang added.

But statistics show that Jansen was not SA A’s best bowler against India A and was in fact third in line as far as wickets went, with six scalps, behind Lutho Sipamla (nine wickets and not in the Test squad) and Glenton Stuurman (seven victims, but struggling with lower limb fatigue).

“Every player who has been selected for this Proteas team is believed and backed to be capable of representing the national team and give a performance of the highest level,” Mpitsang said.

“The absence of one player does not take away from the quality that another brings to the set-up.” Mpitsang said.

• Monday's second day was a complete washout at SuperSport Park and India, who are in command at 272 for three, will hope for quick runs if the rain abates on Tuesday to build on their domination from day one.