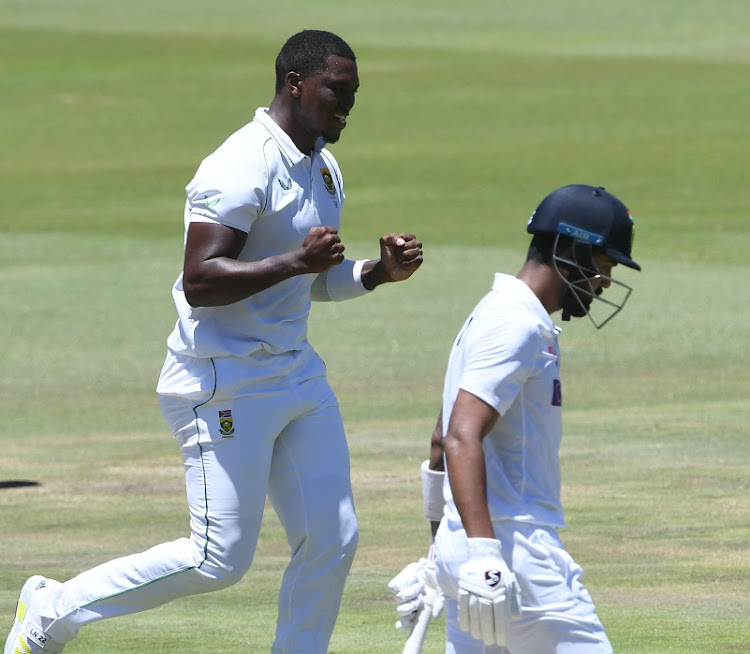 Lungi Ngidi of the Proteas celebrates the wicket of Kannaur Rahul of India on day 4 of the first Test at SuperSport Park in Centurion on December 29 2021.
Image: Lee Warren/Gallo Images

India added 63 runs to their overnight score and increased their second innings lead over SA to 209 before lunch of day four of the Boxing Day Test at SuperSport Park in Centurion.

India started the day with 16/1 on the board, a substantial lead of 146 and with KL Rahul on five runs and Shardul Thakur having contributed four to the scoreboard.

The only wicket to fall for India on Tuesday was opener Mayank Agarwal, who was the victim of a combination of wicketkeeper Quinton de Kock and Marco Jansen, who claimed his second wicket.

SA started day four on a promising note when Thakur was caught by Wiaan Mulder at third slip from the bowling of Kagiso Rabada inside the first 30 minutes.

Ngidi joined the party when Dean Elgar dived the right way at first slip to catch Rahul having scored 23 runs from the bowling of Lungi Ngidi, who claimed his seventh wicket of the match.

After two completed days of Test cricket, India have maintained the upper hand over hosts SA in this intriguing Boxing Day Test that is unfolding at ...
Sport
6 months ago

The demise of Rahul, who scored a sparkling century in the first innings, meant that India have vastly experienced batters in the form of captain Virat Kohli and Cheteshwar Pujara on the crease.

By lunchtime, Kohli and Pujara, who has been under pressure due to lack of runs in recent matches, were fighting on a partnership of 25 off 58.

Kohli will resume in the second session on 18 and Pujara on 12 where they will be looking to continue frustrating fast bowlers Rabada, Ngidi, Jansen and Mulder.

After lunch, there is every possibility that skipper Elgar will turn to spinner Keshav Maharaj in a bid to offer a different variation to the bowling attack and also play the holding role.