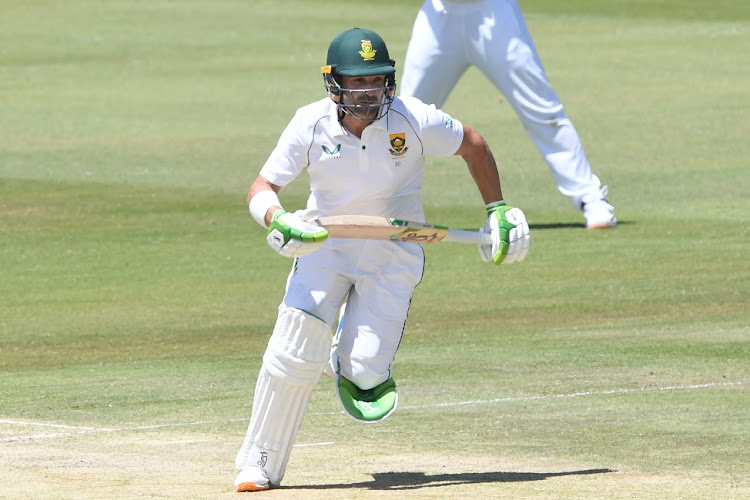 Dean Elgar of the Proteas runs between the wickets on day five of the first Test against India at SuperSport Park in Centurion on December 30 2021.
Image: Lee Warren/Gallo Images

Proteas captain Dean Elgar has admitted that he and opening partner Aiden Markram need to take responsibility and start well in the New Year’s Day Test match at the Wanderers starting on Monday.

The partnership of Elgar and Markram at the top produced only three runs in the 113-run defeat to India in the Boxing Day Test at SuperSport Park in Centurion and the SA skipper agrees it is time the pair front up.

“We know what it is about,” Elgar said about the challenges of opening the batting against quality opposition fast bowlers like Mohammed Shami, Jasprit Bumrah, Mohammed Siraj and Shardul Thakur, who tormented the Proteas at Centurion.

Shami, Bumrah, Siraj and Thakur claimed 18 of the South African wickets that fell, with Ravichandran Ashwin taking the other two.

India have trashed a woeful SA by 113 runs in the Boxing Day Test at SuperSport Park in Centurion.
Sport
4 weeks ago

“Facing the new ball in Test cricket and opening the batting is not easy. You get out with the new ball and go and watch the rest of the game from the stands sometimes. That is just the nature of the beast.”

In comparison, Indian openers KL Rahul and Mayank Agarwal put on a stand of 117 in the first innings to lay the foundation for victory, though they managed just 12 in the second innings.

“They executed their basic fundamentals of opening the batting to a tee. They used the first hour of the first session in their favour where they played very well. They left the ball very well and you have to give them credit for that,” Elgar said.

“Aiden and I have had a rough [patch] of the green at the moment but I said I had a good ball [dismissal] in the first innings, which happens. We are very mindful that as the opening pair, we need to start well and capitalise when we have the opportunity.

“Aiden’s dismissal in the first innings was another rough one.”

Elgar said that SA went five months without competitive action counted against them.

“Playing four- or five-day cricket is something that you can’t replace, but be that as it may the schedule didn’t allow us to play a lot of first-class cricket.

“From a match awareness and match fitness point of view, it was a bit evident and that is by no means an excuse because we knew that coming into the series.”