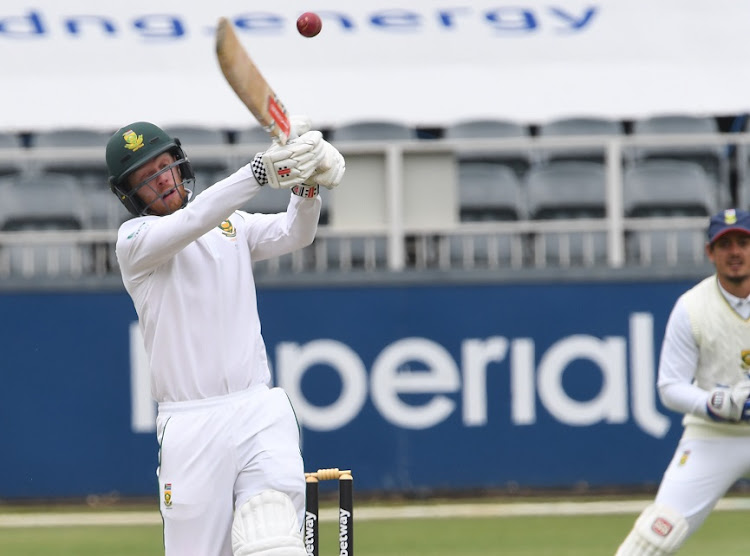 Kyle Verreynne of the Proteas plays a shot in the SA national team practice match at Wanderers in Johannesburg on December 20 2021. Quinton de Kock, who retired as SA's Test wicketkeeper on Thursday, looks on.
Image: Lee Warren/Gallo Images

The sudden decision by Quinton de Kock to retire from Test cricket at the age of 29 has opened up the wicketkeeper position in the longest format for SA and there is no shortage of strong candidates.

The selectors will be looking to replace like-for-like with De Kock, which means a keeper who can occupy a position in the top-six batting order, which in turn allows the team to play a bowling all-rounder.

Kyle Verreynne and Ryan Rickelton are already in the Proteas squad that is taking on India in their three-match series and will be the immediate contenders, but what are the long-term options for the side?

TimesLIVE picks five players who could fill the role:

Verreynne has already played two Tests for SA when De Kock was not available for the West Indies series in June.

He did not cover himself in glory with the bat, scoring 39 runs in three innings, but his first class performances have been superb and he is reliable with the gloves.

He has been in and around the squad for some time across multiple formats, including for this series with India, which would suggest he is the next in line. He also averages 40.42 in nine One-Day Internationals for the Proteas.

But he was the keeper for SA ‘A’ in the recent series against India ‘A’, so he is certainly in the thoughts of the selectors in first class cricket.

He got a fine 82 not out in the first game and was tidy behind the stumps but has perhaps not had the best season with the bat overall.

You could make a strong case for Rickelton to be included in the SA line-up as a batsman, let alone his ability behind the wicket.

He averages a shade under 50 in first class cricket and has an excellent conversion rate with nine hundreds and nine fifties from just 56 innings. He also made hundreds in two of his three first class innings this season, averaging 93.66.

It is form that has seen the left-handed wicketkeeper-batsman included in the Proteas squad for the India series, and his entry at number three in the batting order could allow Keegan Petersen to move further down.

Probably more of a wicketkeeper than batsman at this stage of his career, the former SA Under-19 international has plenty of promise but would need to up his number of runs.

He has also not kept wicket in the last few first class games, but has been selected as a batsman by the Lions who understand his potential.

He was also in the SA Emerging side that played Namibia earlier in the year.

Breetzke scored two centuries in his last two first class games for the Warriors, where he opens the batting.

More of an occasional keeper that a first choice, he would have to be scoring a mountain of runs to move ahead in the pecking order.

It is more likely he would be selected as a batsman, and has made a strong case by sitting second on the list of domestic first class run-scorers so far this season.