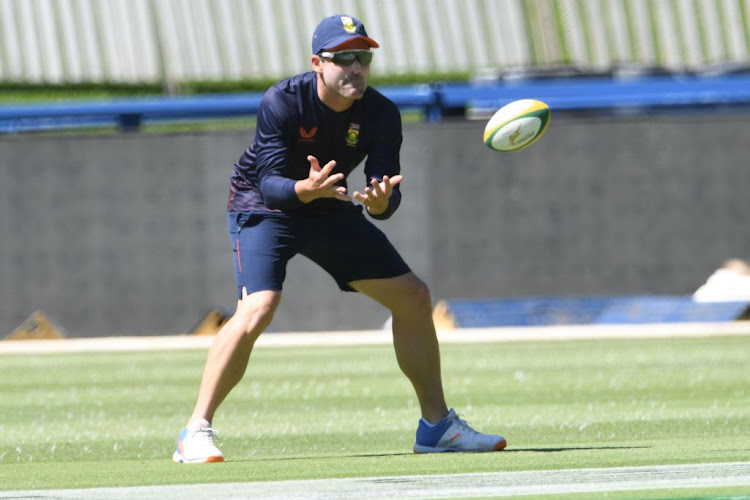 Dean Elgar of the Proteas during the SA training session at the Wanderers Stadium on January 02, 2022 in Johannesburg, South Africa.
Image: Lee Warren/Gallo Images

SA’s batting frailties that have manifested in the last three-and-a-half years were laid bare again in the 113-run first Test loss to India, albeit on a challenging SuperSport Park pitch in Centurion.

The Proteas managed 197 in the first innings and 191 in the second, with only Temba Bavuma (52) and Dean Elgar (77) passing 50 in the match. India certainly had the best of the batting conditions on day one and took full advantage of them. They also have a world-class pace attack, but SA’s inability to post sizeable totals is nothing new. Since July 2018, they have gone past 300 only six times in 37 completed Test innings, while they have been bowled out for less than 200 on 12 occasions.

Between the start of 2008 and June 2018, the side average was 34.83 per wicket in Tests, but that has plummeted to 24.78 since then. Essentially, they are scoring around 100 less per innings on average. It is not rocket science to work out why. Any team that lost batsmen of the calibre of Jacques Kallis, Hashim Amla, Graeme Smith, AB de Villiers, and more latterly Faf du Plessis, would feel their absence.

But the question is where to now for a team that, especially with the premature retirement of Quinton de Kock, looks short on quality and experience in the top six. “You need runs to compete and it’s safe to say we didn’t get that in our first innings,” Elgar told reporters after the loss to India. “They bowled well with the new ball and the nature of Test cricket is that you’ve got to compete against the new ball. The way they started was something we struggled against.” Elgar suggests the issue is that SA’s Test players haven’t played enough first-class cricket in recent years.

“Playing four or five-day cricket is something you can’t replace but the schedule doesn’t allow for our players to play a lot of first-class cricket,” Elgar says. “So there’s a little bit of match awareness and match fitness [missing]. There’s a lot of learning for us that the basics of the game still apply. I don’t think we had that with regards to the batting.”

He has a valid point. A number of the SA players went into the first Test with no red ball cricket under their belt since the Test series win in West Indies in June.

It has also not helped that the batsmen from seven down have too often been a soft touch for opponents, with Elgar picking out all-rounder Wiaan Mulder in this regard.

“Wiaan had a pretty good game [against India] with the ball. [But] he is not living up to his standards with the bat which is something we will chat to him about. In this environment you have to have those open conversations in order for this environment to grow and for individuals to grow.”

It is one thing to understand what the issues are and quite another to effect change. The problems that SA had at SuperSport Park are the same as their batting woes for the last three-and-a-half years. To only pass 300 six times in 37 innings is dire, even if three of those 21 tests were in India and two each in Sri Lanka and Pakistan.

Their 13 losses in those 21 games have almost exclusively been down to the team’s batting struggles, but there is no quick fix and perhaps a long road ahead for the side before they are truly competitive again.