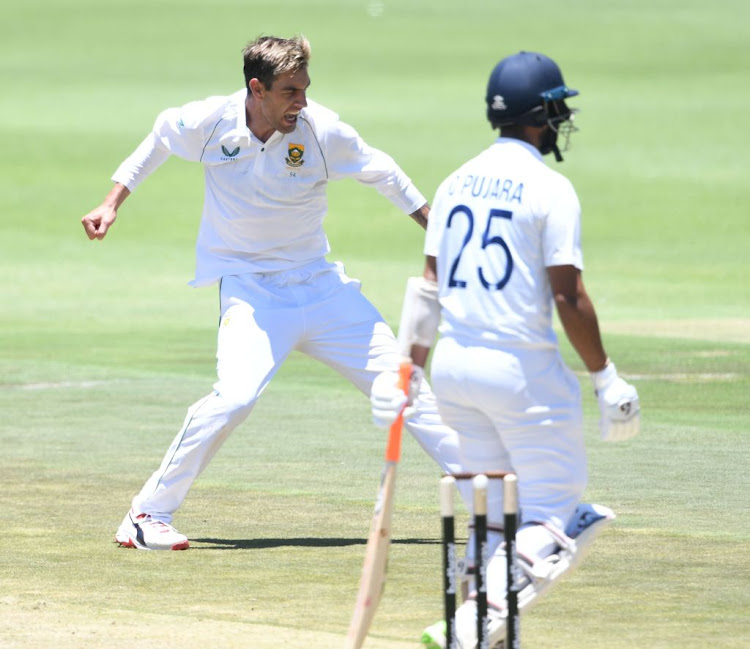 Duanne Olivier of the Proteas celebrates the wicket of Cheteshwar Pujara of India during day 1 of the 2nd Test match at The Wanderers Stadium on January 3 2022 in Johannesburg.
Image: Lee Warren/Gallo Images

Duanne Olivier sped to 50 Test wickets as SA had India firmly on the back foot at lunch on the first day of the second Test at the Wanderers on Monday.

India were 53/3 having won the toss and electing to bat in the second of the three-Test series, undoing much of their earlier slow but steady start.

Olivier, back in the squad after a three-year absence and after being left out of the team for the first Test, bowled with more aggression and accuracy as the morning wore on and captured the wickets of the experienced Cheteshwar Pujara and Ajinkya Rahane.

Both were dismissed on the cusp of the break as Olivier became the third fastest South African to the 50 Test wicket mark after Vernon Philander and Peter Pollock.

India, who were slow but sure before the drinks break, found the going tough in the hour leading up to the lunch break. As they did in Centurion in the first Test, India were untroubled early on.

Sure, there was the occasional play and miss but stand-in skipper KL Rahul and Mayank Agarwal weathered the hard and shiny ball.

The SA attack did not settle into a rhythm, with their variation in length offering the India openers respite.

There were two loud shouts for caught behind inside the first 10 overs but both proved not out with the second costing the home side a review.

Tall left-arm seamer Marco Jansen has received his first call-up to the SA One-Day International squad for their three-match home series against ...
Sport
3 weeks ago

There was also a half chance in Kagiso Rabada's sixth over when Agarwal prodded forward and got a scratch before the ball ballooned to short leg, but the fielder could not make up the ground in time.

Agarwal, who is trying to fill the boots of Rohit Sharma on this tour, was harsh on those who drifted straight or onto his pads. Rahul, perhaps slightly constrained by the weight of captaining the side, was a little more sedate. He was still there at the break on 19.

Drinks break does the trick

However, the first ball after the drinks break with India on 36 yielded a breakthrough for Marco Jansen when Agarwal was caught behind for a 26.

They tightened up by going straighter and higher after the break and it paid dividends for Olivier, who was perhaps unlucky not to have claimed an earlier scalp. Ultimately the pressure paid off and the usually unflappable Pujara could not ride the excessive bounce of Olivier and was caught at backward point by Temba Bavuma.

Rahane then played a lose short first up and was caught in the slips.

A look back at SA's last 10 Tests at the Wanderers

SA head into the second Test against India at the Wanderers on Monday knowing they must claim victory if they are to win the series.
Sport
3 weeks ago

Building up to the toss, there had been much speculation about what the SA XI might look like.

Kyle Verreynne's elevation to the squad after the Test retirement of Quinton de Kock was a given, while Olivier's recall to the team was expected.

He came into the side at the expense of all rounder Wiaan Mulder who is yet to replicate his domestic prowess against the red ball with the bat to the highest level.

The switch means SA has a pronounced tail.

India came into the Test without injured captain Virat Kohli.