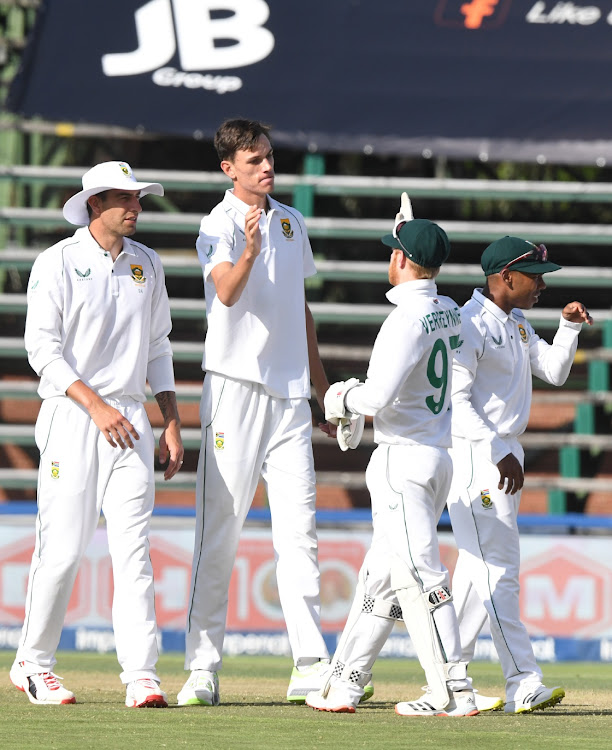 The second Test between SA and India at the Wanderers in Johannesburg goes into the third day on Wednesday delicately poised.

At stumps on Tuesday, the Proteas had removed the opening pair of Mayank Agarwal (23) and KL Rahul (8) and managed to restrict India’s second innings lead to 58 runs.

At close of play, India were on 85/2 after quicks Duanne Olivier and Marco Jansen accounted for Agarwal and Rahul during the final session of what turned out to be an action packed day at the Bullring.

SA were frustrated by the promising partnership (41 off 52) from Cheteshwar Pujara (35) and Anjikya Rahane (11), who stood firm during the closing stages of the third session.

Pujara and Rahane will be under pressure on Wednesday morning from Kagiso Rabada, Lungi Ngidi, Olivier and Jansen, who will be looking to strike early and give their side a chance of levelling the series 1-1.

It was high action earlier in the day as 11 wickets fell and 279 runs were scored with SA ending their first innings all out for 229 while replying to India’s score of 202.

Proteas reach 229 all out as Maharaj and Jansen ensure slender advantage.
Sport
7 months ago

From a Proteas’ perspective, there were improvements in the batting department with notable partnerships like the one of 74 of 211 between Dean Elgar and Keegan Petersen at the top.

During the middle overs, Temba Bavuma and Kyle Verreynne were part of a crucial 60 (122) runs stand and lower order batters Maharaj and Jansen contributed 38 (48).

SA started the day on 35/1 after the wicket of Aiden Markram late on Monday and he was followed by Elgar (28), Petersen (62) and Rassie van der Dussen (1) before lunch on Tuesday.

Petersen was the standout performer with the bat for the Proteas with his maiden Test half century and another glimpse into his undoubted potential as a top order batter.

The main talking point before lunch was the controversial dismissal of Van der Dussen as he was given out, caught behind, by Rishabh Pant off Shardul Thakur but TV replays showed the ball did not carry to the wicketkeeper.

Keegan Petersen registered his maiden Test half-century but SA went to lunch under the pump following the loss of three top order batters before ...
Sport
7 months ago

Thakur continued to be destructive during the second session as he trapped Verreynne in front for 21 and removed Bavuma in the next ball after the ODI captain scored his 17th Test half century.

Shortly before tea, Mohammed Shami joined the wicket taking party as he claimed the scalp of Kagiso Rabada without scoring as SA went to tea still trailing by 11 runs.

During the third session, Jasprit Bumrah claimed his first wicket of the match, accounting for Keshav Maharaj, who contributed a crucial 21 runs, and Thakur cleaned up the tail.

Thakur, who ended with the best innings figures for India in SA of 7/61, got Jansen, after a solid contribution of 21 runs, and Ngidi before he could add something on the scoreboard.