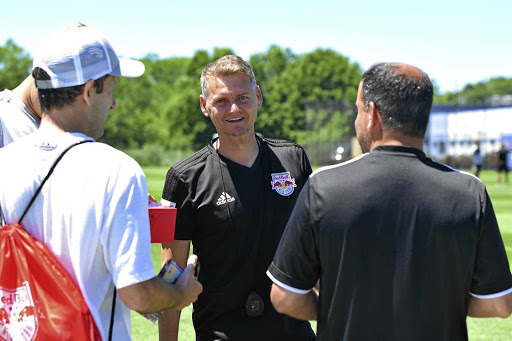 Bradley Carnell will be building a soccer team in the US - St Louis City - from scratch before it joins Major League Soccer next year.
Image: Bradley Carnell

But the former Orlando Pirates assistant coach will not actually get to sit in a dugout in a competitive match for more than a year. The former Bafana Bafana full-back will next year take charge of St Louis City, who will be joining Major League Soccer.

He has been appointed with a year to spare, effectively to scout and hire players and build a new team that will ready to go in just over 12 months. Major League Soccer has been steadily expanding over the years, allowing new teams to buy their way into the league, at up to $100m.

Last year Austin, Texas, became the latest market to have a side in the league, with the actor Matthew McConaughey among the owner-investors, and Charlotte FC will making their bow next month, when the new MLS season gets under way.

St Louis are then next up for the 2023 campaign.

MLS started in 1993 with 10 teams but is now up to 28 as soccer grows in the North American market.

St Louis City is the first female-majority owned team in MLS and hired the German Lutz Pfannenstiel as their sporting director. He in turn has recruited Carnell as the first head coach.

Pfannenstiel was working at the German club Hoffenheim when they bought Knowledge Musona from Kaizer Chiefs and knows Carnell well from his time in the Bundesliga.

Carnell left Pirates to join the Red Bull organisation and their New York franchise in 2017.

He was assistant coach but in 2020 acted as caretaker coach when Chris Armas was fired.

Armas is now the assistant to Ralf Rangnick at Manchester United, a job Carnell was linked with last month.

Carnell, who turns 45 this month, told his new club’s website: “I am looking forward to establishing a team that reflects St Louis — one that’s diverse, hardworking and community-led.

"I am thrilled to help create the future of the sport in an incredible soccer city.”