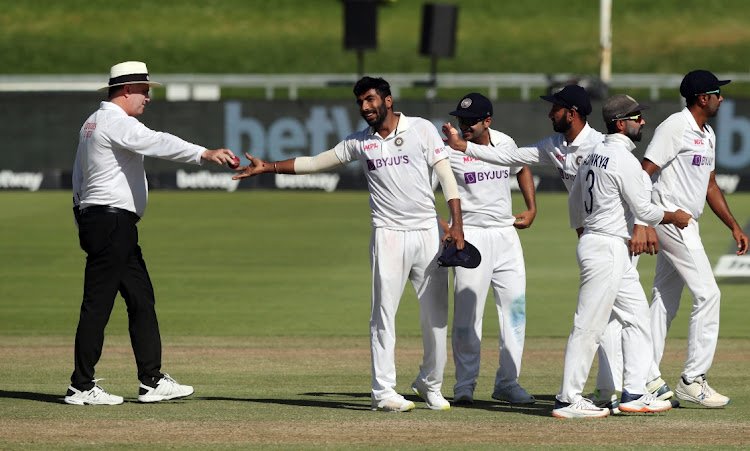 Jasprit Bumrah bowled India into a position of strength with searching spells of swing bowling on a thoroughly absorbing day of Test cricket at Newlands on Wednesday.

By the end of the second day of the third and deciding Test India had reached 57/2 for an overall lead of 70 over the Proteas.

Bumrah bagged five wickets in the SA first innings to not just drag India back into the contest, but put them in a position where they can now dictate terms.

Like Kagiso Rabada, who now has 18 wickets in the series, on day one, the leader of the attack had to stand up when it really mattered. Bumrah more than answered the call with figures of 5/42 from 23.3 overs.

India had two of their most senior batsmen, Cheteshwar Pujara and Virat Kohli, at the crease when stumps were drawn and they will look to the pair to build significantly on the lead on Thursday morning.

SA will attach themselves to the belief they can repeat the heroics of their successful fourth innings chase at the Wanderers but that will take some doing here on a pitch on which run-scoring is becoming an increasingly perilous exercise.

Keegan Petersen stood tall but India delivered telling blows at the other end on the second day of the deciding Test at Newlands on Wednesday.
Sport
2 weeks ago

India, of course, will consider what happened at the Wanderers an aberration and will feel confident they can set a target that will daunt and ultimately prove beyond SA.

The went into the second innings with a meagre 13-run lead but will draw comfort from the fact that they won't have to bat last.

SA made a promising start in their quest to restrict the tourists and by the end of the sixth over they had removed both openers. No further inroads were made on a day that belonged to India.

It was clear from the outset on the second morning that the tide was ready to shift but SA opener Aiden Markram hardly helped his cause by shouldering arms to a ball that nipped back and hit the top of off stump.

It immediately put SA on the back foot, while India were gradually able to assert themselves in the field.

On a pitch that demanded vigilance three batters did the hard work up front, only to undo their graft by getting out. It was the kind of pitch where batters never felt 'in'.

Even Petersen, who looked relatively untroubled, suddenly succumbed to a Bumrah delivery that bounced steeper than he anticipated.

Having faced 166 deliveries, the crestfallen batter gazed down the wicket before making a deliberately slow departure.

Only seven of SA’s expected line-up for the decisive third Test against India starting on Tuesday have played a match in the game’s longest format at ...
Sport
2 weeks ago

India, who had SA three down at lunch, grabbed four more by tea but the home team still held out hope that Petersen could provide some sting with the tail and take them beyond the tourists' first innings total.

Shortly after tea, however, Petersen too nicked one from Bumrah to be caught behind.

His 72 provided the backbone of the SA first innings effort but the fact that no other batter reached 30 proved hugely problematic for the home team.

Petersen again looked accomplished. He did not display his full range of attacking shots but the conditions and the disciplined India attack did not permit lavish stroke play.

SA's captain Dean Elgar says the third and final test against India at Newlands on Tuesday is his team's biggest match in 15 years as they look to ...
Sport
2 weeks ago

Running in from the Kelvin End in the morning session Bumrah proved a handful.

He troubled most batters with a testing line but he also extracted bounce that served to keep the already vertically challenged SA top six on their toes.

To the tail-enders he went even shorter and the SA quicks either copped blows or took different forms of evasive action.

After their pre-lunch mishaps SA sought to repair the damage and at 112/3, including the wicket of the nightwatchman Keshav Maharaj, they would have harboured aspirations of building a first innings lead.

The imminent demise of Rassie van der Dussen, however, changed the tone of the day's proceedings. It didn't extinguish the hosts hopes of getting a lead but it drove home the magnitude of the task facing them.

SA would have been enthused by dismissing India for 223 on the first day but that total appeared more daunting as the shadows lengthened here on the second day.

Bumrah was ably supported by Mohammed Shami, who was wholehearted in his efforts from the Wynberg End. He struck huge blows when he removed Temba Bavuma and Kyle Verreynne quickly in succession.