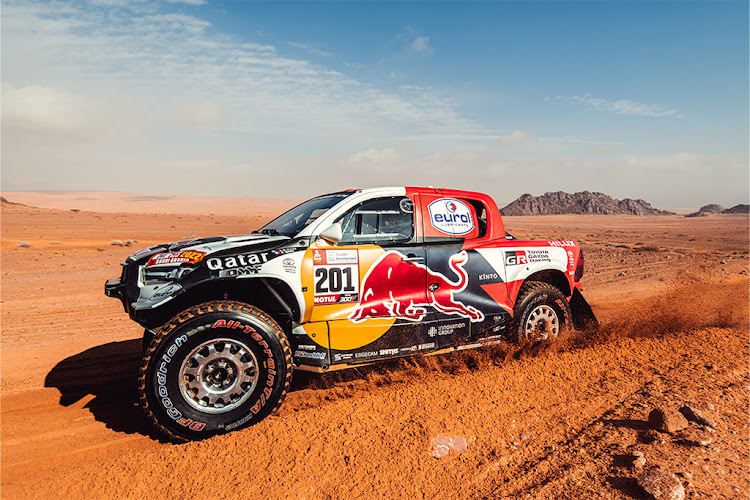 Nasser Al Attiyah was on the brink of his fourth Dakar Rally victory after ending Thursday's penultimate stage in Saudi Arabia with a 33-minute advantage over French rival Sebastien Loeb.
Image: Supplied

Qatar's Nasser Al Attiyah was on the brink of his fourth Dakar Rally victory after ending Thursday's penultimate stage in Saudi Arabia with a 33-minute advantage over French rival Sebastien Loeb.

The 44th edition of the endurance event ends in Jeddah on Friday after a 680km leg from Bisha, including a 164km special stage.

Spaniard Carlos Sainz, a triple Dakar winner, won the 11th stage for Audi with Al Attiyah seventh in the loop around Bisha. It was his second stage win of 2022 and 41st of his career as well as a fourth for Audi's electric hybrid car.

Nine times world rally champion Loeb was classified eighth after being handed a five-minute penalty for speeding in a restricted zone.

Argentinian rider Kevin Benavides ended the defence of his Dakar Rally title on Wednesday when his KTM motorcycle broke down on the 10th stage in ...
Sport
1 week ago

“We are in a good way. Tomorrow is a shorter stage. We just need to continue like this on the same pace,” commented Al Attiyah, who has led from the January 1 start in his factory Toyota.

“To control the Dakar is not easy but I think we have a lot of experience now and we just need to manage the situation and to finish. You don’t need to win every day.”

In the motorcycle category, Britain's Sam Sunderland returned to the top with a lead of six minutes and 52 seconds over Chile's Pablo Quintanilla. Argentine Kevin Benavides, last year's rally winner on two wheels, won the stage but is out of contention after collecting a 15-hour penalty on Thursday when his bike suffered a mechanical problem.

“I’ll just try to have a clean stage tomorrow and hopefully we can get it done,” said GasGas rider Sunderland, Dakar winner in 2017.

“A lot of guys sort of took it easy yesterday on the stage to have a better start position today. You saw that today everybody pulled the pin; It was ‘let’s go’. I was the same, all in and here we are.”

In the truck category, Russian Dmitry Sotnikov ended the day with an eight-minute advantage over Kamaz teammate Eduard Nikolaev.