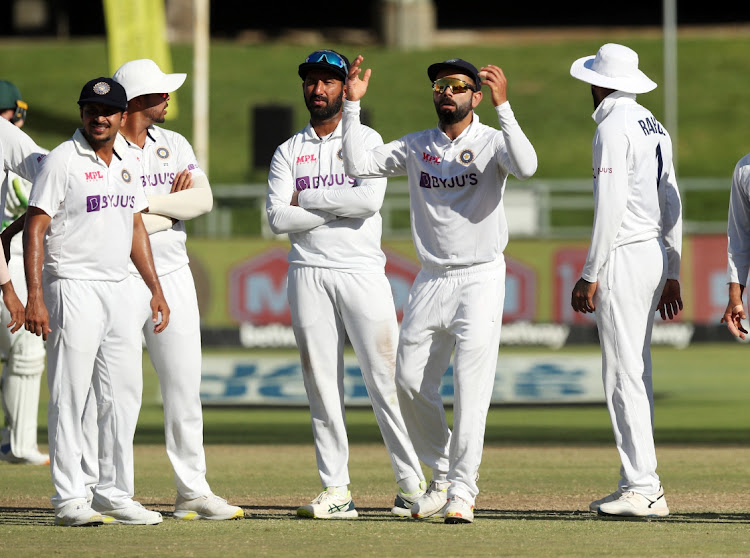 India's Virat Kohli and his teammates were left incredulous after a LBW decision against SA captain Dean Elgar was overturned at Newlands.
Image: Reuters/Sumaya Hisham

Emotions ran high as the third and deciding Test edged closer to climax on the third day at Newlands on Thursday.

India captain Virat Kohli was incensed after SA captain Dean Elgar successfully reviewed an LBW decision against him off the bowling of Ravichandran Ashwin.

Umpire Marais Erasmus gave Elgar out on 22 but ball tracking projected the ball would clear the bails by a very narrow margin.

India were not prepared to leave the matter there and Kohli and Co had their say. Kohli, in a reference to the sandpaper scandal, called out broadcaster SuperSport for the role they played in unmasking the Australian culprits in 2018.

Kohli made a point of walking to the stump microphone before saying: “Focus on your team as well when they shine the ball and not just the opposition. Trying to catch people all the time.”

Ashwin was even more direct. “You should find better ways to win SuperSport.”

Vice captain KL Rahul joined the chorus. “The whole country is playing against 11 guys,” he said.

Erasmus was also left incredulous and was heard saying: “that is impossible” after the DRS decision was revealed.

India's bowling coach Paras Mhambrey tried to draw the sting from the debate when he addressed reporters after the day's play. “We saw it, you saw it. I'll leave that for the match referee to have a look at it. There's nothing I can comment on it now. We've seen it all, just want to move on with the game now.”

However, what Kohli and Ashwin hinted was that the Decision Review System (DRS) was open to manipulation and whether that breaches the International Cricket Council's (ICC) code of conduct was not immediately apparent.

SA quick Lungi Ngidi was reluctant to delve into the matter apart from saying: “We have seen it used on numerous occasions all around the world. It is the system that is in place. It is what we use as cricketers,” said Ngidi.

“I think reactions like that show a bit of frustration and sometimes teams capitalise on that. You don't want to show too much emotion but as you can see there, emotions were high and that probably tells us that they're feeling a bit of pressure.

“It was a good partnership for us as well so they really wanted to break it and their feelings showed,” said Ngidi about the 78-run stand between Elgar and Keegan Petersen.

Elgar ironically, fell to a DRS decision against him. He was dismissed down the leg side off the impeccable Jasprit Bumrah for 30, that turned out to be the last ball of the day.

The Proteas will on Friday resume their second innings on 101/2, still 111 short of their victory target and a series win.