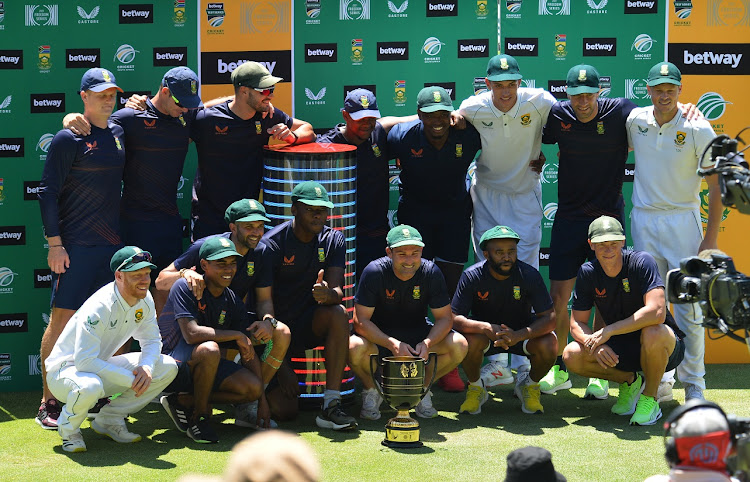 SA captain Dean Elgar and his teammates with the Freedom Cup trophy at the post-match presentation after winning the match and Test series on day 4 of the third Test against India at Newlands on January 14 2022.
Image: Grant Pitcher/Gallo Images

SA captain Dean Elgar admits he had to show some tough love to his players, which he believes was behind their turnaround in fortunes as they completed a seven-wicket third Test victory over India at Newlands on Friday to claim the series 2-1.

The home side were well beaten by 113 runs in the first Test in Pretoria, but bounced back, against expectations with their young side, to win in both Johannesburg and Cape Town against the number one-ranked team in the world.

“We have a young, talented group,” Elgar said. “The experience isn’t there, but we are gaining it and getting better every day.

“It was unreal to see how a group that doesn’t have the ‘names’ could gel together and play as one. This is a proper unit. It was a proper team win.”

India captain Virat Kohli says the team's batting line-up "must be looked into" for Tests away from home as he pinned the blame for the team's 2-1 ...
Sport
6 months ago

Elgar admitted he did not pull any punches after the loss in Pretoria and says there were some tough conversations within the group.

“Ultimately if you want to operate at a high-performance level you need to have tough, hard chats. If guys don’t like it, that is up for them to deal with,” he said.

“I am a bit of an old school mentality with a new school twist, but I laid down some proper challenges to some senior players to stand up and respond. It was brilliant to see the guys take the message on board.

“If you want to be world number one in the future, you have to compete and beat the best.”

SA, who won their previous series in West Indies in June, will next play Test cricket when they tour New Zealand for two matches next month.

“We are by no means the finished article,” Elgar said. “But I am already thinking about the next series, which is something I need to try and manage and control, because I will burn my brain out.

“There are a lot of positives going into that series, but also a lot of negatives we need to hit on the head.”