Nadal happy to be back competing again after setbacks 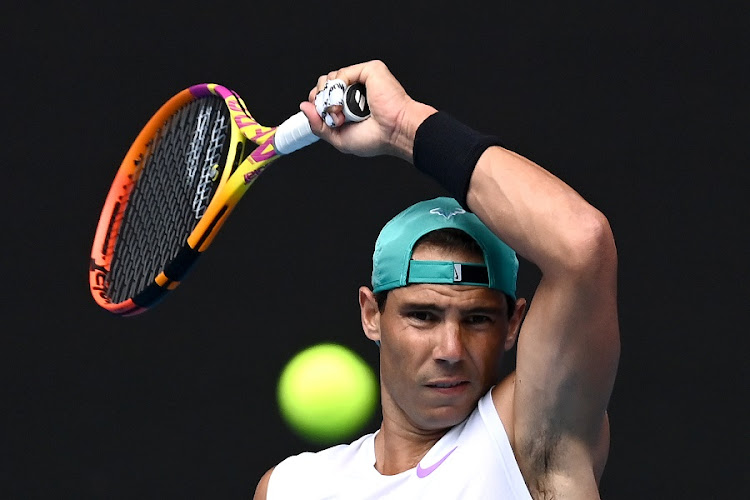 Rafael Nadal of Spain hits a forehand during a practice session ahead of the 2022 Australian Open at Melbourne Park on January 15 2022.
Image: Quinn Rooney/Getty Images

Rafa Nadal said on Saturday he is delighted to be free of injury and illness and is excited about competing at the Australian Open where he will bid for a record 21st Grand Slam title.

Returning to the Tour after recovering from a foot issue that sidelined him for nearly four months, the 35-year-old Spaniard won his 89th career title last week at an ATP 250 tune-up event in Melbourne.

His preparations for the Australian Open, which he won in 2009, were interrupted last month when he tested positive for Covid-19 after an exhibition tournament in Abu Dhabi.

“I came here just with the clear goal to be back on the Tour,” Nadal said. “That's the most important thing.

“Then if I am able to win matches, be improving every single day, fantastic. I'm excited about playing again in a Grand Slam here in Australia.

“Just enjoying the practices and be back and feel myself again a professional tennis player. I'm playing some good tennis.”

Rafa Nadal called Novak Djokovic's Covid-19 vaccination controversy in Australia "a circus" and joked that he would prefer that the world number one ...
Sport
1 week ago

Nadal, tied with Novak Djokovic and Roger Federer for a men's record 20 major titles, was knocked out at Roland Garros in the semifinals last year and was forced to pull out of Wimbledon and the US Open due to injury. While unsure about his fitness for best-of-five sets matches, Nadal said getting healthy was his top priority.

“I just want to go day-by-day,” added Nadal, who will face American Marcos Giron in the opening round. “But practices help. Every day I spend on court, I think it's positive.

“I want to give myself a chance to keep enjoying this beautiful sport, to keep fighting for the things that I have been fighting for for the last 16 years.”