Another major, another fourth round for sizzling Swiatek 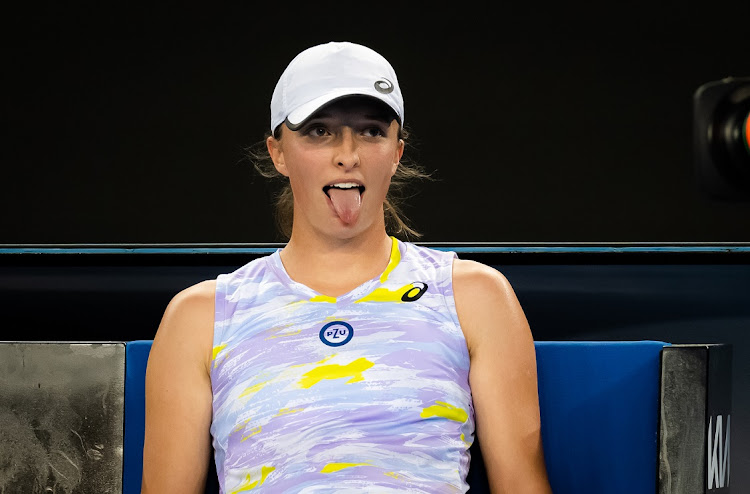 Iga Swiatek of Poland sticks out her tongue towards her entourage after winning her third round singles match against Daria Kasatkina of Russia at the 2022 Australian Open at Melbourne Park on January 22 2022.
Image: GETTY IMAGES/ ROBERT PRANGE

Former French Open champion Iga Swiatek continued her consistent streak at Grand Slams, dominating from the baseline to roll over Daria Kasatkina of Russia 6-2 6-3 on Saturday to storm into the Australian Open fourth round.

It is the sixth consecutive major in which the 20-year-old from Poland has made at least the fourth round.

“It's not a good way to focus on that,” said Swiatek, who has sailed through her first three matches this week, losing only 12 games in the process.

“That stat, I'm really proud of it right now that I achieved it, but in the morning I would say it gave me a little bit more pressure.”

Differences in host countries' laws might make it too hard to impose a Covid-19 vaccine mandate on all the women on the professional tennis circuit, ...
Sport
5 months ago

The 23rd-ranked Kasatkina, a former top-10 player, won her only previous meeting with Swiatek in 2021 but that match was played on grass.

Seventh-seeded Swiatek, who won the clay court Grand Slam at Roland Garros in 2020, hit 24 winners and broke Kasatkina's serve twice in each set to cruise through the contest at Margaret Court Arena in one hour and 34 minutes. Swiatek felt she was able to tactically disrupt Kasatkina from using her topspin-heavy forehand.

“That was a really intense match. I feel like I'm playing better and better every match, so that's a positive,” the 20-year-old said.

Swiatek will meet either another Russian in 10th seed Anastasia Pavlyuchenkova or 38th-ranked Sorana Cirstea of Romania next for a place in the quarterfinals at Melbourne Park. Taking one match at a time has worked well for Swiatek and she was not planning to change that approach.

Naomi Osaka said she is enjoying her tennis again and is having fun on the Tour after the defending champion overcame an unexpectedly stiff challenge ...
Sport
5 months ago

“I want to have some tournaments that I'm going to really make something bigger than fourth round,” she said.

“On the other hand I don't want to focus on that, because I'm pretty good right now at just looking at another match, another step, not looking [at] what's going to happen if I'm going to win two more matches.”