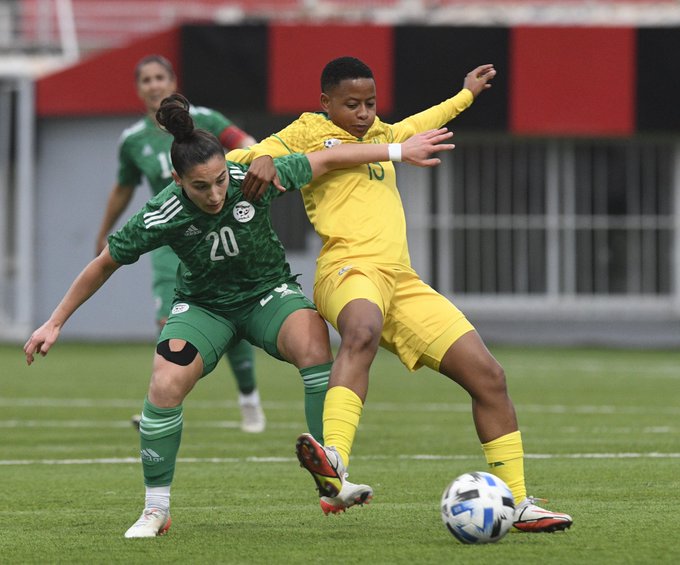 Banyana Banyana have qualified for the Africa Women Cup of Nations (AWCON) to be hosted by Morocco in July.

SA were held to a 1-1 draw by Algeria at the Stade Omar Hamadi in Algiers on Wednesday night but progressed 3-1 on aggregate after they won 2-0 at Orlando Stadium last week.

The all-important away goal for Banyana was scored by Linda Mothlalo from the penalty spot on the hour mark to cancel out the opening goal by Algeria’s Sylia Koui on the stroke of half time.

Banyana travelled to North Africa with a significant advantage after the home win that was secured through goals by Hilda Magaia and Thembi Kgatlana in the first leg last week.

This win is for the thirteenth time Banyana have qualified for the tournament and they will be looking to make it to the World Cup for the second time running after they qualified for France in 2019.

The expectation on the shoulders of SA's women's team to win every game has grown in recent years and the mood was dampened when they lost 3-0 to ...
News
4 months ago

The first real chance for Banyana came after 11 minutes when Kgatlana delivered a telling cross into the box but Magaia was disturbed by alert Algerian goalkeeper Chloe Yamina.

A few minutes later, Yamina was once again called into action and had to stretch at full length in the air to deny Mothlalo’s thunderous shot from close range.

Yamina was busy as she was frequently threatened by Magaia, Kgatlana, Kholosa Biyana and Mothlalo during the early exchanges while her counterpart Andile Dlamini was not tested.

Algeria’s first threatening opportunity ended with the ball in the back of the net but the referee disallowed Naima Bouhani’s goal for kicking the ball from the hands of Dlamini.

Algeria got the much-needed goal on the stroke of half time when attacker Sylia Koui headed home from close range after a defensive mistake by the South Africans.

On the hour mark, Banyana drew level through Mothlalo’s penalty after Sofia Guellati was punished for handling the box in the penalty box — and that proved to be enough as SA booked their tickets to the tournament.