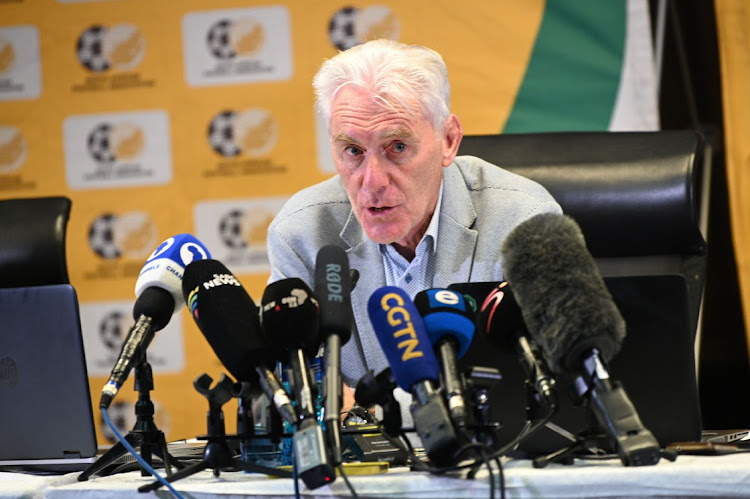 It’s been a long time since Bafana Bafana has had strong opposition to test them, but coach Hugo Broos is confident the next two friendly matches against Guinea and France are what SA need before a tough year.

Bafana are in Europe to play Guinea on Friday in Kortrijk‚ Belgium (7pm SA time) before their clash with star-studded world champions France in Lille on Tuesday.

Broos is hoping the two matches will be a test that his players desperately need before the start of their 2023 Africa Cup of Nations (Afcon) qualifiers in June.

The Belgian tactician believes for SA to be a successful footballing nation‚ they need to stop playing friendlies against weak opponents to boost their win ratio.

“For me these are important games‚ they are difficult games‚ I asked for difficult games because I’ve been told that in the past it was not usual for SA to play tough friendly games‚” said Broos.

“It was always against weak opponents ... and SA were sure even before the game that they were going to win it.

“I think we are not sure if we are going to win these next two games — but it will be a very good experience for all the players.

“It will be a good opportunity to see — especially the new players — if they are really an improvement for us‚ if they can bring the power and the experience that I expect‚” he said.

Broos has stressed that Bafana have opted for a performance-driven approach instead of easy wins.

“What I expect from these games is not a good result because I think it will be very tough when you play against the world champions. A good game will be great‚” the coach said.

“I want to see these players out there showing their quality so  they can be there in June — that we will have a stronger team than we had for the World Cup qualifiers‚” he said.

Broos said booking a spot in the 2023 Afcon to take place in Ivory Coast is a must for him.

“In two months‚ there will be qualifiers for Afcon. I’ve said it already from the beginning, this is a must‚ we have to go to Ivory Coast next year‚ we have to be present in Afcon.

“ I hope the games we are playing right now will give us what we expect and I’m sure we will be stronger Afcon qualifiers and be there in Ivory Coast for the tournament.”