Lions red-hot streak in URC continues with win over Edinburgh 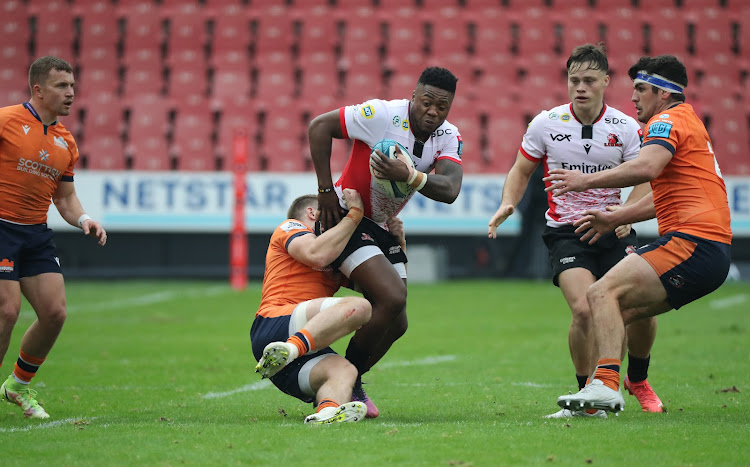 Wandisile Simelane of the Lions is tackled by James Lang of Edinburgh during their Vodacom United Rugby Championship match at Ellis Park.
Image: Gavin Barker/BackpagePix

The Lions' winning streak is starting to glow red-hot but they had to dig deep and rise high in the face of Edinburgh's aerial assault in this United Rugby Championship (URC) clash on Saturday.

They passed that searching examination and had to defend like demons to record their fourth straight win, this time 15-9.

Ellis Park had a Murrayfield feel about it and the visitors may well have felt at home in chilly, gloomy overcast conditions.

A kilt and a Scottish flag were spotted in the Main Stand and as the game reached the half-hour mark the sound of a bagpipe served as jarring wake up call for the hosts more than the visitors.

With the game played at frenetic pace passes were pushed and the ball was lost in contact.

The first points were registered when Edinburgh fullback Quinton Immelman had sufficient time to compose himself and slot a marvellous long range drop goal in the 13th minute.

The Lions have been creeping up the United Rugby Championship (URC) points table but are not getting ahead of themselves.
Sport
3 months ago

The Upington-born fullback proved a thorn in the Lions' side.

Edinburgh rather relished the close combat arm wrestle and allowed the Lions very few broken field opportunities in the first half.

The hosts were also conceding avoidable penalties and left-wing Emiliano Boffelli added a penalty in the 29th minute, the Lions though got more traction as the first half wore on.

They were digging up turf in the scrum, loose head prop JP Smith carried the ball with gusto, flank Vincent Tshituka bounced and wriggled out of tackles, while scrumhalf Morne van den Berg gradually extended his influence.

His probing runs around the fringes had Edinburgh scrambling and it was down to a moment of his magic the Lions scored the first try of the match.

He broke blindside, slid into a half gap and offloaded to left-wing Edwill van der Merwe, who in turn fed Jordan Hendrikse.

The next moment that turned the course of events arrived when Edinburgh flank Magnus Bradbury was yellow carded in the 51st minute.

The Lions profited almost immediately when they deployed a driving maul, passed smartly before a speeding Tshituka sped to the try line unmarked.

It proved the game breaker.

Lions wary of SA presence in Edinburgh side

The Lions will be wary of the threat posed by the strong SA influence in the Edinburgh side when the teams square off in a United Rugby Championship ...
Sport
3 months ago

In the early kickoff, the Bulls put a lethargic start behind them by overwhelming Ulster in the second half of their clash at Loftus.

The Bulls will be well pleased with the win and the victory margin but they would have had much to lament at the break.

The Bulls were starved territory and possession in the first half by an Ulster team still smarting from their defeat at the hands of the Stormers a week earlier.

The Bulls who were 9-3 down at halftime, scored tries through loose forward Marcell Coetzee, left-wing Madosh Tambwe, hooker Johan Grobbelaar and fullback Kurt-Lee Arendse in the second half to run out 34-16 winners.