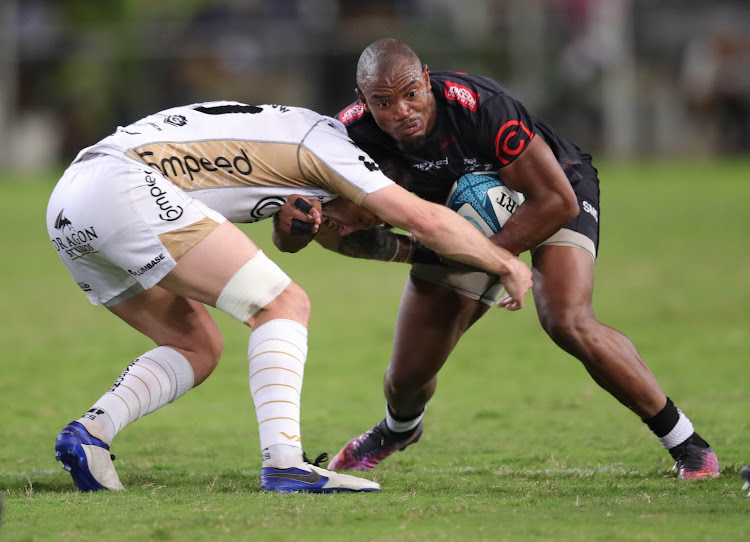 Sharks winger Makazole Mapimpi attempts to get past Josh Lewis of the Dragons tackle during their United Rugby Championship match at Kings Park in Durban.
Image: Samuel Shivambu/BackpagePix

The Sharks put the hapless Dragons to the sword as they scored six tries to thump the Welsh side 51-3 in their United Rugby Championship (URC) match at Kings Park Stadium in Durban on Friday night.

The bonus point victory gave a huge boost to the Sharks’ quarterfinals mission as they moved from position eight to the sixth spot on the URC log.

The Sharks had four tries in the clash from Ox Nche, Bongi Mbonambi, the exciting Werner Kok, who was the man of the match, Anthony Volmink and two penalty tries on the night, while Curwin Bosch was on fire with his boot for the Sharks who led 23-3 at halftime.

From the outset, the Sharks played like a team that knew how important it was for them to win the match to stay in the race for the URC quarterfinals.

The Sharks front row of Nche, Mbonambi and Thomas du Toit continued their excellent performance when it came to scrums, as they forced their counterparts to give away penalties early in the game.

Nche and Mbonambi didn’t only win penalties for the Durbanites, but they also scored the Sharks’ two tries in the first half.

Prop Mbonambi scored on 29 minutes while hooker Mbonambi also crossed the whitewash in the 34th minute.

Credit must also go to flyhalf Curwin Bosch who managed to pick himself up after he received some flak for his terrible kicking in the Sharks’ previous defeat to Edinburgh.

In the opening half, Bosch didn’t miss a single kick as he scored three penalties and had no problems in his two conversion attempts.

The first half was marred by a terrible injury to Dragons No.8 Ross Moriarty who had to be stretchered off the pitch after he came second in a tackle against his opposite number Phendulani “Phepsi” Buthelezi.

The Dragons’ points came early in the first half when Josh Lewis scored his only penalty kick of the night.

In the second half, the home team continued where they left off with the visitors not really causing any serious threats. Kok got on the scoresheet on 48 minutes.

Things went from bad to worse for the Welsh team that has had only one win from 12 matches, as they conceded two penalty tries on 59 minutes and Lewis Jones was yellow carded.

Those penalty tries saw the Dragons being reduced to 13 men.

Volmink also got his name on the scoresheet on 67 minutes and the Sharks did leave a couple of tries on the park.