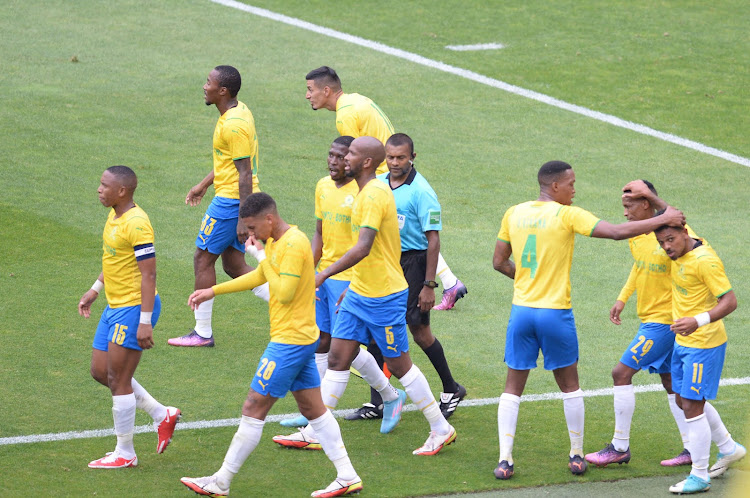 George Maluleka, who hasn’t enjoyed much game time since he joined Sundowns in 2020 from rivals Kaizer Chiefs, scored his first goal at the club early in the opening half.

The other goals for Sundowns were netted by Surprise Ralani, who joined the team in January from Cape Town City, and substitute Kermit Erasmus in the second half.

After President Cyril Ramaphosa said last week that venues for professional sport events can operate at 50% capacity, the turnout of supporters at Soccer City — as the stadium is popularly known — was not great at all.

The number of supporters who turned up for the match between the reigning DStv Premiership champions and the Sudanese side did not look more than 3,000.

This despite the Pretoria giants having offered free tickets with the aim of attracting at least 20,000 fans to create a festive atmosphere at the venue.

With the capacity of FNB Stadium being 94,000, Sundowns could have accommodated 47,000 supporters.

Sundowns troubled by injuries ahead of Champions League match

Mamelodi Sundowns' bid to end their Caf Champions League group stages campaign on a high note is being frustrated by several injuries in their camp.
Sport
2 months ago

Sundowns came into the game with no real pressure as the local side had already secured the top spot in Group A and a quarterfinal place in the continental stage.

On their way, the Chloorkop-based outfit achieved a great double over Pitso Mosimane-coached Al Ahly of Egypt and Al Hilal of Sudan.

Before Saturday's game, Merrikh was the only team in the group that had managed to avoid a defeat to Sundowns.

The two teams played to a goalless draw when Merrikh hosted the SA team in February.

Rushine de Reuck, who only returned to the country on Thursday morning from France with Bafana Bafana, started the match on Saturday.

The hosts had a great start to the clash in FNB Stadium with players such as Surprise Ralani showing the opponents were going to be in for a long afternoon.

WATCH | How Sundowns goal ace Shalulile got his scoring groove back

When the goals dried up Mamelodi Sundowns attacker Peter Shalulile stayed away from the panic button, instead choosing to reset.
Sport
2 months ago

Ralani came close to breaking the deadlock after 13 minutes of play but his dink hit the pole and Merrikh’s keeper Mohamed Mustafa collected the ball making sure no Sundowns player scored from a rebound.

However, the visitors couldn’t deny Masandawana a goal for that long as George Maluleka scored on 15 minutes.

Merrikh’s defence managed to deal with the high pressure of Masandawana for the rest of the first half.

The second half produced two more goals with Ralani getting on the scoresheet on 66 minutes as the 34-year-old got the better of Mustafa in a one-on-one situation.

After replacing Maluleka, it took Erasmus just four minutes on the pitch to score a beautiful volley on 72 minutes.

Sundowns will travel to Swallows for a domestic league game on Wednesday before entertaining ABC Motsepe League side, Summerfield Dynamos, in the Nedbank Cup next Saturday.