Mngqithi: Sundowns edging towards a quadruple, but have to keep grounded 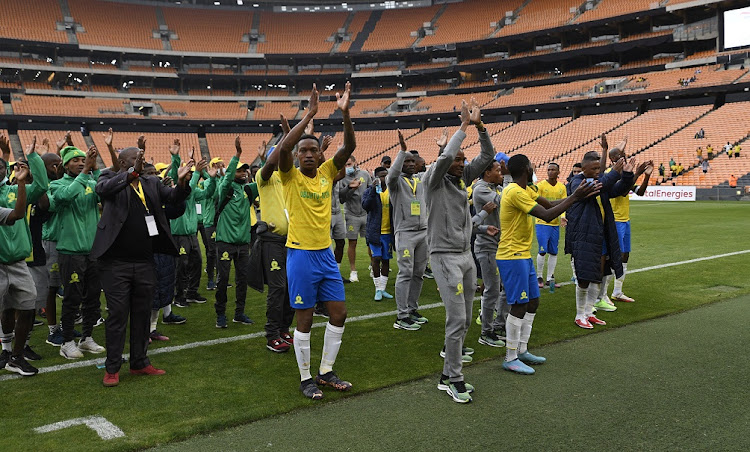 Mamelodi Sundowns co-coach Manqoba Mngqithi is “optimistic” about achieving a quadruple this season, but also warns his team not to get carried away too quickly.

Sundowns, who defeated Al-Merrikh 3-0 in their last match of Group A in the Caf Champions League at FNB Stadium on Saturday, have a chance of making a clean sweep of trophies this season.

Bafana Ba Style have already won the MTN8 trophy in 2021-22 and are well on course to defend their DStv Premiership trophy. Mngqithi’s charges are also in the quarterfinals of the Champions League and the Nedbank Cup.

The coach said while his team always compete in every competition to win it, and are doing very well in that task at the moment, there’s a need to remain grounded until the job is finished.

“ When we start every competition we’ve got a desire to win. There’s no competition that we get into just for the sake of taking part,” Mngqithi said.

“But when you start to focus on everything, you end up not getting anything.

“So it’s very important for us to focus on the small milestones that we can always achieve by making sure we concentrate on every next match and make sure we deliver that match.

“That number is going down slowly but surely, and that is promising for the boys. We just have to stay more focused and not get carried away too quickly.

“Last year we qualified for the quarterfinals of the Champions League very early but we didn’t win it.

“It’s very important that we don’t accept small milestones and think we have achieved much. We haven’t achieved anything.

“We are in the quarterfinals of the Champions League and Nedbank Cup, and we haven’t won the league yet, so we have to concentrate on every match.”

Domestically, Sundowns seems to be in a league of their own with no team able to go toe-to-toe with them.

Sundowns lead the Premiership standings with 51 points after 23 matches and enjoy and a 11-point gap over second-placed Royal AM.

There’s a 13-point gap between Sundowns and third-placed Kaizer Chiefs, who have two games in hand and a court will decide if they will be played.

In the Champions League, Masandawana have also enjoyed a great run as they won five matches in the group stages and drew one.

They also achieved a rare double over African giants Al Ahly, who finished as runners-up in Group A.

“We’ve got our own benchmark we are trying to make sure we achieve and the team looks interesting, and we are optimistic,” Mngqithi said.

“We can go all the way if we stay focused and pay more attention to the process and respect the opponent and not start to think we are on top of it.”