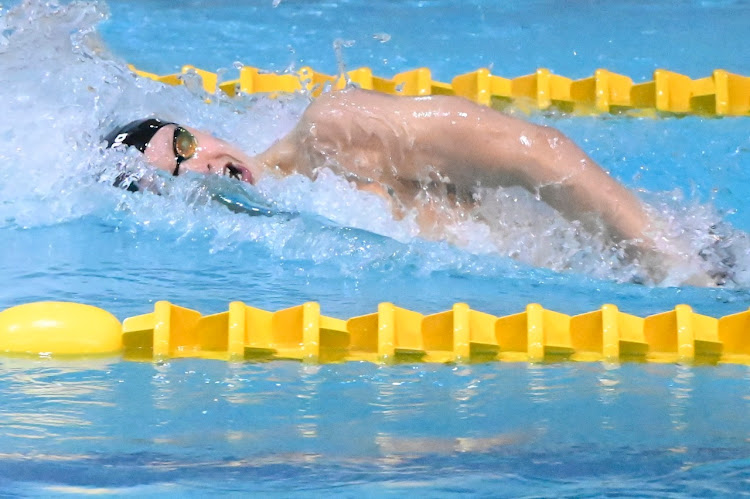 Matthew Sates swimming the final freestyle leg on his way to winning the 200m individual medley title in Gqeberha on Monday.
Image: SUPPLIED

Matthew Sates left the SA national aquatic championships in Gqeberha on Monday night as the king of local swimming with the most individual crowns after capturing his fourth title.

The US-based student led the 200m individual medley from start to finish, winning in 1 min 58.37 sec to beat Englishman Max Litchfield, fifth in the 400m IM at the Tokyo Olympics, by more than a second and a half.

Litchfield had closed the gap during the second leg of backstroke, Sates’ weakest stroke, but then the South African pressed ahead in the breaststroke and freestyle to shut out the race in style.

His evening effort and even the 1:59.13 he swam in the morning heats were inside the 1:59.76 qualifying criterion for the world championships in Budapest in June. It is understood the same times are being used for the Commonwealth Games in Birmingham from July 28 to August 8.

Sates, who also won the freestyle trifecta over 100m, 200m and 400m, posted qualifying times in two events in all, the 200m freestyle being the other.

But it was his friend, Pieter Coetzé, who qualified in the most events — four in total — adding the 200m backstroke in a time trial earlier on Monday.

He smashed a 1:56.92 personal best to get under the qualifying time by more than a second.

Coetzé had scratched from the 200m backstroke final on Sunday to focus on the 50m freestyle, which he won after qualifying in it while competing in a relay on Saturday.

Nursing a painful right shoulder, Matthew Sates swam the second-fastest 200m freestyle in the world so far this year as he scooped his second crown ...
Sport
1 month ago

This is the first time this millennium that more women than men have qualified for a major gala.

But bear in mind that with the depth in the women’s breaststroke, with Tatjana Schoenmaker and Lara van Niekerk making it in both the 50m and 100m races and Schoenmaker and Kaylene Corbett in the 200m, that’s a total of only five different events qualified for by the women.

That’s not great when considering that there 17 races for the women.

While SA men qualified in 53% of the 17 possible world championship races, the women were at 29%.

While Schoenmaker’s Olympic medals might glitter brightly, they shouldn’t blind anyone to the lack of depth in SA swimming.

And qualifying standards for last year’s Olympics were tougher in more events than they are for the coming world championships; getting to Paris 2024 will be even harder.

Make no mistake, SA swimming has much to celebrate and look forward to, but there is also plenty to think about in the months and years ahead.​