Proteas rip through Tigers’ tail for second big Test win, and the series 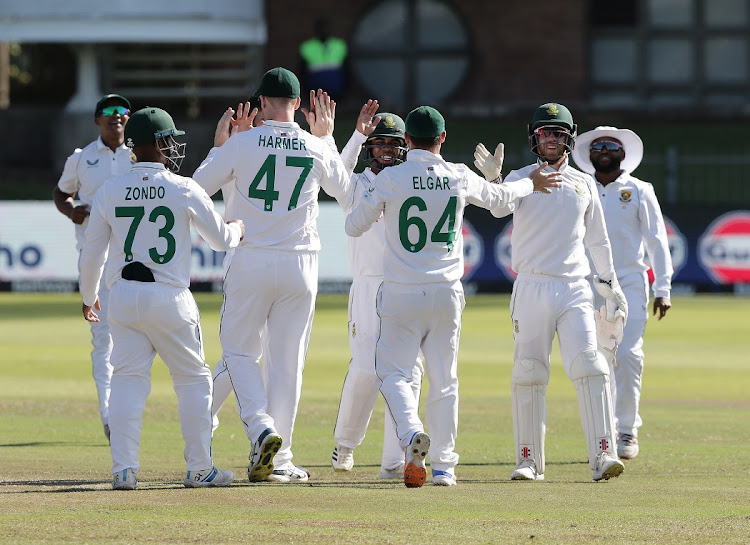 The Proteas celebrate the dismissal of Mushfiqur Rahim of Bangladesh on day 4 of the second Test match at St George's Park in Gqeberha on April 11 2022.
Image: Richard Huggard/Gallo Images

Keshav Maharaj took seven second innings wickets as the Proteas dismissed Bangladesh for a meagre 80 runs to claim a comprehensive 332-run victory at St George’s Park in Gqeberha on Monday.

SA needed just 14.2 overs to capture the remaining seven wickets in Monday’s first session, ending the match within the first hour of day four to claim a 2-0 series whitewash against the Tigers.

SA batted to a big first innings of 453, then bowled Bangladesh out for 217. The Proteas declared their second innings on 176/6 late on Sunday, then had the Tigers on the ropes 27/3 by the close of day three.

That score was a mere morsel of the huge 413-run target to win, and if Bangladesh were already on the back foot coming into what was essentially the final day, their situation was made worse when they lost Mushfiqur Rahim in the second over.

Maharaj had Rahim sharply caught by captain Dean Elgar in the slips, the right-hander scoring just a single in his eight-ball stay in the middle.

Bangladesh captain Mominul Haque (5 off 25) was Maharaj’s next victim when he top-edged a delivery that was pouched by Ryan Rickelton to leave the visitors reeling on 38 for five.

Things got worse as they lost their next five wickets for 42 runs in 57 deliveries.

Simon Harmer and Lizaad Wiliams combined to dismiss Yasir Ali for a four-ball duck before Maharaj ripped through the Tigers’ tail.

He had Litton Das stumped by Kyle Verreynne for 27, and the wicketkeeper was in action again to hand Maharaj his sixth wicket of the second innings when he caught Mehidy Hasan Miraz for 20.

The slow left-arm orthodox bowler had Khaled Ahmed dismissed leg before wicket for a three-ball duck before Harmer wrapped things up with the wicket of Taijul Islam for 0.

Maharaj, in becoming the first spinner to take seven wickets in the fourth innings of consecutive Test matches, finished the innings with 7 for 40 and match figures of 9 for 97 alongside his first innings top score of 84 to take player-of-the-match.

He also earned player-of-the-series ending as the leading wicket-taker with 16 dismissals  to go with his 108 runs scored.