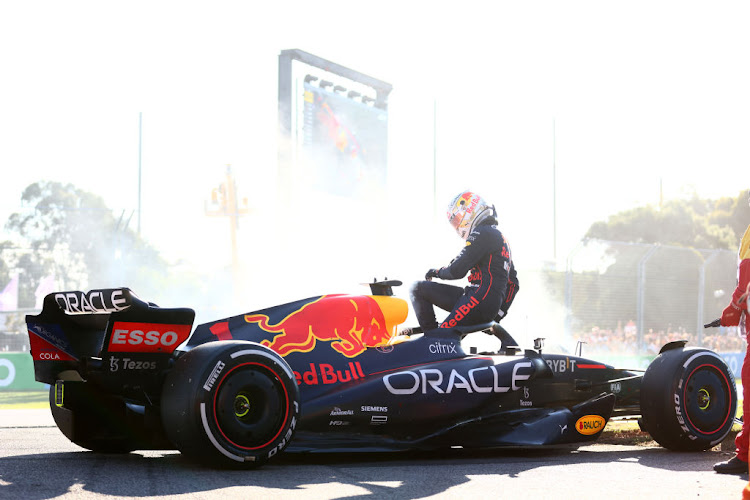 Max Verstappen climbs from his car after retiring from the Grand Prix of Australia at the Melbourne Grand Prix Circuit on April 10 2022.
Image: Mark Thompson/Getty Images

Max Verstappen says two things need to happen for him to have a chance of successfully defending his Formula One title and Red Bull are not managing to do either.

The Dutch 24-year-old gave his verdict after suffering a second retirement in three races on Sunday with the Australian Grand Prix leaving him 46 points behind Ferrari's dominant winner Charles Leclerc.

"We are already so far down in the championship that from now onwards you first need to be faster than them [Ferrari], which we're not, and zero problems with the car which we also don't have," said Verstappen.

Verstappen is sixth in the standings with 25 points while Leclerc, winner of two out of three and runner-up in the other race, is on 71 and has a 34-point lead over closest challenger George Russell of Mercedes.

The biggest gap at the top in last season's championship was 32 points between Verstappen and Mercedes seven times champion Lewis Hamilton after Austria in July, with the pair going into the final round in Abu Dhabi level.

Leclerc has taken a bonus point for fastest lap in all three races and started twice on pole position in the best start to a season by a Ferrari driver since 2017 when Sebastian Vettel racked up two wins and a second place.

Vettel did not win the title that year because Hamilton was always close behind, taking a win and two second places in the first three rounds before coming back strongly.

Rival team bosses Toto Wolff and Christian Horner said on Wednesday that Formula One needed to turn the page on the controversies of the contentious ...
Sport
2 months ago

Ferrari's rivals have been unreliable (Red Bull) or off the pace (Mercedes) this year and the next race is at Ferrari's home Imola circuit in Italy.

"It was a terrible race, no pace. I couldn't push because the tyres were getting destroyed," said Verstappen of Sunday's race in which team mate Sergio Perez finished second.

"We are miles behind, so I don't even want to think about the championship fight at the moment," Verstappen told Sky Sports television, saying the failure to finish was "frustrating and unacceptable".

"These sort of things, if you want to fight for the title, cannot happen."