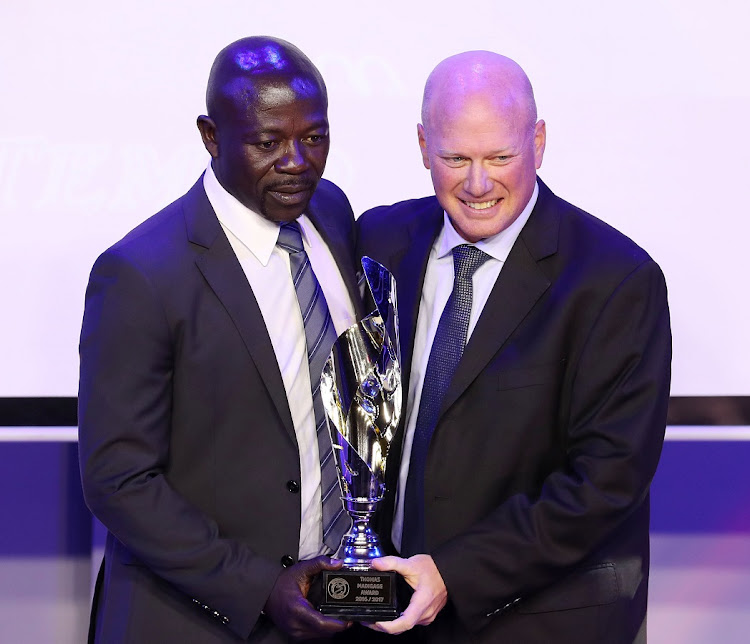 SuperSport United CEO Stan Matthews says the team throwing away matches they should have won and a string of poor results that “just became too much” were the reasons for Kaitano Tembo being sacked as coach on Tuesday.

Matthews admitted that losing to a team from the GladAfrica Championship in another game SuperSport led — 2-0 against Tshakuma FC in the Nedbank Cup last-16 in Thohoyandou on Friday night, only to lose 3-2 — was the final straw.

The fact SuperSport had never lost to second-tier side in the Nedbank Cup was also a factor.

“It's obviously a very sad day in the life of our football club,” Matthews said.

“There are obviously mixed emotions. Kaitano has contributed so much and we all love him so much. He's been a fixture for over two decades, which is very rare at a club. So everybody is heartsore today.

“Unfortunately in football, as we know, we are judged by our results. We've now gone 11 games with 11 points, we've tossed away some games where we were well in front and should have wrapped up the points, and we've thrown away lots of points in the league.

SuperSport United coach Kaitano Tembo has refused to comment on the whereabouts of their want-away player Sipho Mbule.
Sport
1 month ago

“And then we've gone and lost to a First Division side in the Nedbank Cup, which is something that's not happened to us before.

“We certainly don't think we should have lost that game, and unfortunately the string of results just became too much.

“That's the hard nature of football. But nothing can erase what Kaitano's contributed to the club — the third-longest serving coach in the history of the club and someone who will always be remembered so fondly, so kindly. And who knows — the doors in the future will always be open to Kaitano.

“It's sad that it hasn't gelled with this group of players. But nothing detracts from his contribution to us and his value as a coach.”

This season SuperSport are in eighth place in the league, outside their top six domain, but with six games remaining. Tembo has also been asked more than previous Matsatsantsa coaches to promote young players, while top performers have been sold off amid budget cuts.

The Nedbank exit, and manner of it, plus five matches without a win in all competitions (three defeats, two draws), and a previous capitulation from a 2-0 lead to lose 3-2 against Orlando Pirates among those, prompted Tembo's exit.

SuperSport United and Head Coach Kaitano Tembo have reached a mutual agreement to part ways, with Assistant Coach Andre Arendse appointed to the position for the remainder of the current PSL season. pic.twitter.com/tKdiCs5RLI

“We have to look forward, focus on these remaining six matches and try to finish in the top eight,” Matthews said.

“It's also not easy with the injuries and Covid-19 and things we've had in the club — we've been hit by a real storm. But we have to weather these things.

“We've got big matches coming up — a big match against Kaizer Chiefs and our former coach [Stuart Baxter] on the weekend, and we have to show professionalism, strength and character and fight for the club.

“The players need to know that they have to fight for themselves too. They understand that they played a big part in where we are as a club in terms of Kaitano not being with us.

“They have to stand up and take that kind of responsibility, and they've now got six matches to show that they've got more in their locker than they showed in the last 11 games.

“So hopefully we can still put in a semi-strong finish to the season and lay a good foundation for next season with this group of players, who we do believe in and who have been so close to some good results lately only to throw them away.”

SuperSport meet Chiefs in the league at FNB Stadium on Saturday.