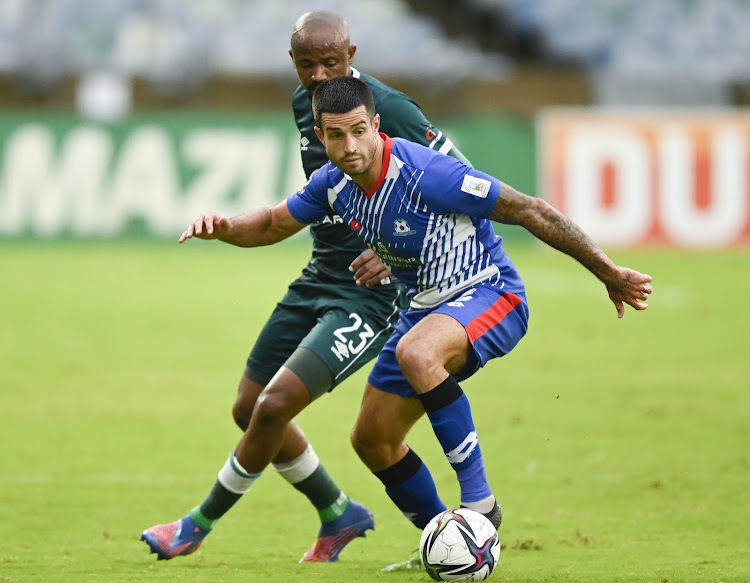 Keegan Richie of Maritzburg United is challenged by Xola Mlambo of AmaZulu during the DStv Premiership match at Moses Mabhida Stadium in Durban on Saturday.
Image: Gerhard Duraan/BackpagePix

AmaZulu strengthened their chances of finishing in the DStv Premiership's top eight after winning a second successive match under interim coach Brandon Truter.

This time they beat KwaZulu-Natal rivals Maritzburg United 1-0 at a wet Moses Mabhida Stadium in Durban on Saturday.

Maritzburg right-back Nicholas Lukhubeni turned a clearance into his own net in the 21st minute, giving Truter another three points with his new side after he started with a 1-0 away victory against Baroka last weekend.

Lehlohonolo Majoro had passed the ball to Tercious Malepe but Usuthu's left-back poor first touch was good enough to bounce off the leg of on rushing Lukhubeni to beat goalkeeper Marcel Engelhardt.

The win keeps Usuthu in seventh spot with 35 points, just one behind Stellenbosch in sixth position.

For Maritzburg coach Ernst Middendorp this defeat will put him and his team under more pressure as they've now gone four games without victory.

‘There will be accountability if we don’t get top-four finish,’ warns AmaZulu boss Zungu

AmaZulu FC president Sandile Zungu has sent a stern warning to his coach Benni McCarthy and the team, saying there will be accountability if the club ...
Sport
1 month ago

Middendorp's team remain on the 12th spot and five points clear of Baroka, who are at the bottom with 18 points after 25 matches — the same number of matches as the Team of Choice.

There was nothing really separating these teams before Lukhubeni's own goal.

Maritzburg could have taken the lead in the 6th minute when Genino Palace's shot deflected, forcing AmaZulu keeper Veli Mothwa to make a last-gasp save off the line.

Maritzburg had all the possession in the second half but what they did with it was not good enough to give them goals to beat a team they had drawn against in their last three KZN league derby meetings.

Mothwa also put AmaZulu in tight spot in the 65th minute when he was adjudged by referee Victor Hlungwani to be delaying the game.

The Usuthu keeper was only relieved when they managed to clear the dead ball.

Luvuyo Memela had time and space to put AmaZulu 2-0 up in the 78th minute but his curling shot missed the upright by a few inches.

In the end it didn't matter as Usuthu managed to hold on to their lead and bagged another three points, boosting their chances of finishing in the top eight for a second season running.