'If they want me to go, I will go. I'm the only coach to bring Chiefs success in 20 years' — Baxter 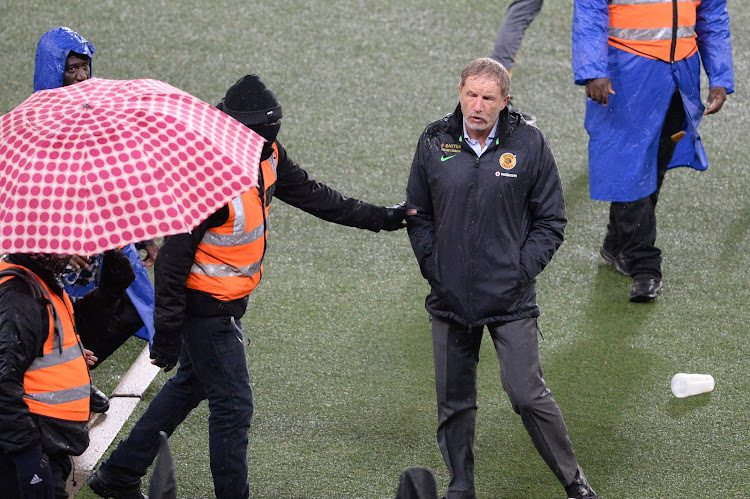 Under-fire Kaizer Chiefs coach Stuart Baxter is prepared to vacate his position at the club, though only if chair Kaizer Motaung tells him to.

That’s what the 68-year-old coach said after his side's 1-0 defeat to SuperSport United in a DStv Premiership match at FNB Stadium on Saturday night.

Thamsanqa Gabuza scored in the second half to give interim coach Andre Arendse a good start to leading the team until the end of the season, having replaced former coach Kaitano Tembo who was sacked on Tuesday.

The match marked a return of Chiefs supporters to FNB Stadium for the first time in two years and it wasn’t a happy one for them as their side lost.

Afterwards Baxter said he had no message for fans who chanted he must go after another defeat in Chiefs' poor season.

“I don’t have any message to the fans, because if they want me to go, I will go. If the chairman says to me ‘Stuart, I don’t think you are doing a good job,’ then I will walk,” Baxter said.

“I’ve got no problem doing that. I will walk myself if I don’t think I’m affecting the team in a positive way, I will walk. No problem.”

Stuart Baxter furious as Chiefs are stunned by youthful SuperSport

Wasteful Kaizer Chiefs disappointed a few of their faithful supporters who braved the cold and rainy weather to watch them lose 1-0 to a youthful but ...
Sport
2 months ago

The Briton then made the bold statement that he is the only coach who has managed to lead Chiefs to success in the past two decades, a statement that is not factually true.

“I’m the only coach who has given this club any success over the last 20 years,” Baxter said.

“And I’ve got to go because we’ve dominated the game and we lost 1-0, I’ve got to listen to them.

“They are fans and have got the right to say exactly what they want. If that reflects what the chairman thinks, what the players think and what our majority of fans think, then maybe I should walk.

“Obviously, that’s not something a group of fans will decide. The football club will decide, or I will decide and if I get that feeling, of course I will walk,” the coach said.

“But at the moment, I’m looking at this as a game that we should have won. We did enough to win it, but we didn’t [win it].

Baxter is not the only coach to have given Chiefs success in the past 20 years, which would date back to 2002.

Amakhosi won a number of trophies in that period including two MTN8 titles, five Telkom Knockouts, two league titles and a Nedbank Cup, all  before Baxter's first stint which started in 2012 and ended in 2015.

Chiefs face Stellenbosch FC in the league away from home on Saturday (5pm).