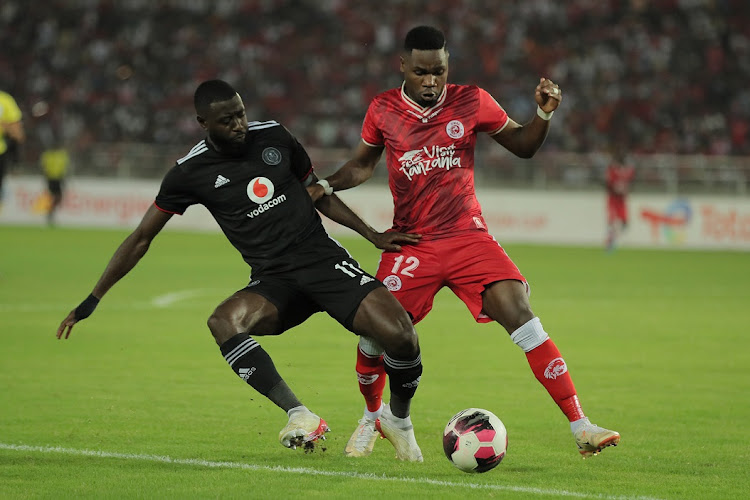 Orlando Pirates will have to penetrate an ultra-defensive Simba SC in the return leg in Johannesburg, but will feel confident they did enough with a 1-0 first leg defeat on Sunday night to still hold the slight the advantage in their Caf Confederation Cup quarterfinal.

Shomari Kapombe’s 68th-minute penalty separated the two sides at Mkapa National Stadium in Dar es Salaam, Tanzania. Bucs, though, will feel the have the firepower to overcome the single-goal deficit in the return leg at Orlando Stadium this coming Sunday.

A huge crowd packed the intimidating 60,000-seat venue. But perhaps it was an indicator that 1-0 at home for Simba may not be enough that Bucs kept the home supporters largely subdued by restricting the Tanzanian club to that scoreline.

Pirates, seeking their first continental final since losing to Etoile du Sahel in the 2015 Confed, are also keen to erase the memory of last season's 5-1 aggregate quarterfinal humbling to eventual winners Raja Casablanca.

The Buccaneers would have known to be wary of the opponents and venue where the hosts have a reputation for employing gamesmanship around continental matches. While Simba have had changes in personnel, they have a fearsome reputation in front of the big crowds they draw there.

They beat Pitso Mosimane's eventual winners Al Ahly at Mkapa Stadium ending top of their group in the 2020-21 Caf Champions League. In the quarterfinals Simba gave eventual finalists Kaizer Chiefs a nervous time — after a 4-0 defeat at FNB Stadium the Tanzanian club rallied to a 3-0 win at home, exiting 4-3 on aggregate.

Orlando Pirates suffered a second successive humiliating defeat when they were knocked out of the Nedbank Cup by holders Marumo Gallants on penalties ...
Sport
2 months ago

Pirates would have been pleased that the opening half was mostly fought out as a dour midfield battle, with few chances for either side.

Bucs mostly absorbed Simba's pressure and probed cautiously in the other direction.

The SA side had their best opportunity inside the opening 10 minutes — a half-chance, as Kwame Peprah beat Simba left-back Mohamed Hussein and advanced but could only punt a tame strike with his left toe past the left upright.

Simba produced easily the best chance of the half in the second minute of added time as big striker Kope Mugalu's deft back-heel from the right touchline played Bernard Morisson into the box.

The match continued in the same vein into the second half until Morisson turned on his pace to streak past Ntsikelelo Nyauza on the left. Happy Jele came across for the covering challenge but the Ghanaian's speed, pushing the ball ahead, made Pirates' captain commit the foul

Tunisian referee Haythem Guirat pointed to the spot and the decision was upheld by VAR. Morisson's opposite winger Kapombe sent Richard Ofori the wrong way to slot inside the right upright.