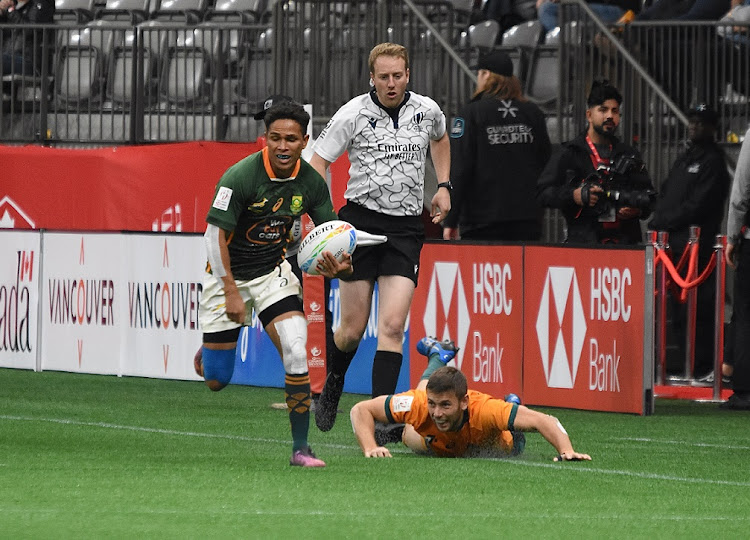 Ronald Brown of SA breaks free for a try against Australia on day 2 of the HSBC Canada Sevens at BC Place in Vancouver on April 17 2022.
Image: David Van Der Sandt/Gallo Images

After a disappointing 28-17 defeat to Samoa in the Cup quarterfinals of the HSBC Canada Sevens, the Springbok Sevens team bounced back with two strong performances to make up for crashing out of a potential podium place in Vancouver.

While the loss against Samoa was a bitter pill to swallow for the Blitzboks, they recovered with wins over France and New Zealand to claim fifth place in the tournament.

The Blitzboks, defending champions in Canada, never got going against Samoa. A rash of penalties, poor defence and even worse handling saw them drop 21 points before the break.

While the Blitzboks lost the services of Darren Adonis, Ryan Oosthuizen and Dewald Human due to injury, and Shaun Williams limped off in the second half, it was the lack of urgency in attack that will sit uncomfortably with their supporters.

A clinical performance was needed to overhaul the Samoans in the second half, and though they scored three tries after the break, the Blitzboks conceded a fourth.

Blitzboks to face Samoa in Cup quarterfinals in Canada

The Springbok Sevens team started the defence of their HSBC Canada Sevens title on a strong note by beating Spain, Canada and Australia to top Pool C ...
Sport
1 month ago

The Blitzboks bounced back in the fifth-place semifinal against France. The South Africans scored six tries — three by Siviwe Soyizwapi — as they outplayed the European side and won 36-7.

The South Africans finished the tournament on a strong note when they outplayed New Zealand 17-15 in the fifth-placed final.

New Zealand opened the scoring early when they outflanked the Blitzbok defence soon after the kickoff. The reply was instant as a good defensive read by his inside backs allowed Soyizwapi to regather a stray pass and race in to score. Ronald Brown converted for a 7-5 lead.

Soyizwapi then turned villain when he did not ground the ball in time while sliding over the line, denying his team a crucial try. Instead, it was the All Blacks Sevens who scored when Zain Davids was beaten with an in-out after sustained pressure by the Blitzboks was repelled.

SA’s all-conquering Sevens side go into this weekend’s World Series event in Seville, Spain, seeking a sixth tournament win in a row, but without ...
Sport
3 months ago

That handed the lead back to New Zealand (10-7) and extended that in the second half after SA were pinged for a scrum penalty. The All Blacks Sevens took a quick tap and scored.

This left SA with two scores needed in under three minutes left and it was soon reduced to one when JC Pretorius was worked over. With two points the deficit, James Murphy scored in the corner after Impi Visser won the restart and the ball was recycled wide.

Brown's conversion hit the crossbar, but the lead was good enough and SA the victors over last weekend's Singapore Sevens finalists.

Argentina won the tournament in Vancouver after beating Fiji 29-10 in the final for their first Cup title in 14 years, while Australia took the bronze by edging Samoa 21-19.