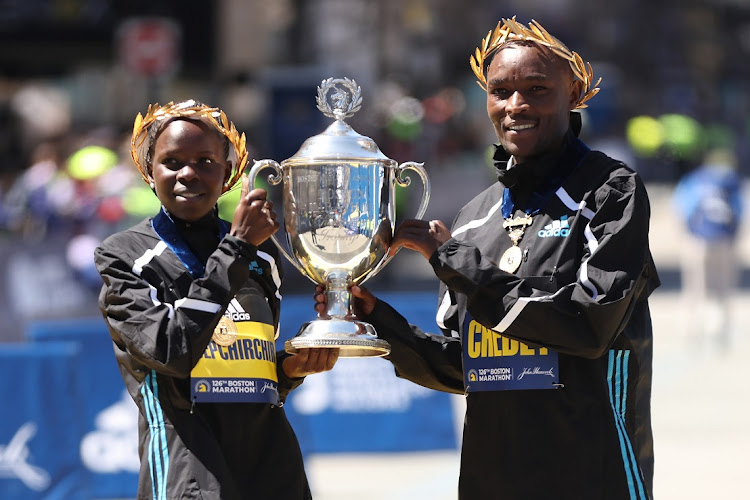 Kenyans Peres Jepchirchir and Evans Chebet pose for a portrait with a trophy after placing first in the professional women's and men's divisions in the 126th Boston Marathon in Boston, Massachusetts on April 18 2022.
Image: Maddie Meyer/ GETTY IMAGES

With one mile remaining, Jepchirchir moved ahead of Ababel Yeshaneh but the Ethiopian refused to bow and retook the lead before the pair battled down the final stretch. Jepchirchir, who won in New York in November, needed every ounce of energy to break the tape in two hours 21 minutes and one second, four seconds ahead of her rival.

Above all, I was feeling she was strong and I pushed it, I feel I'm tired. I went behind, but I didn't lose hope

“Above all, I was feeling she was strong and I pushed it, I feel I'm tired. I went behind, but I didn't lose hope,” Jepchirchir said. “The course is tough but thank God I managed to win the race.”

The win confirmed Jepchirchir as among the most dominant marathon runners of all time, as she became the first athlete to claim Olympic gold along with the Boston and New York titles.

A huge leading pack stuck together through 35 kilometres before Chebet pulled away, securing an 18-second advantage over 2019 winner Cherono with one mile left. The bells of the Old South Church rang and a roar came up from the crowd along Boylston Street as he ran towards the finish line.

“At the beginning I was not confident, I didn't know that I would come out as the winner,” Chebet said.

“When I went to London, I came fourth. And when I went to Paris, I was in position four. Today, I am really happy that I am actually the winner.”

The race started in Hopkington in perfect conditions with temperatures hovering in the mid-10°C as the world’s oldest annual marathon returned to its traditional spring date for the first time in three years.

The fastest field in the race’s history took off on Boston’s festive “Patriots Day” holiday with the Red Sox playing at Fenway Park and plenty for New England sports fans to celebrate after the Celtics won their NBA playoff opener on Sunday.

The wheelchair races featured dominant performances from two of the sport’s most reliable podium finishers.

The City of Cape Town on Wednesday issued the final race permit for the Two Oceans Marathon to go ahead this weekend, after a clear traffic plan for ...
Sport
4 months ago

Tokyo Paralympic marathon silver medallist Manuela Schar of Switzerland defended her title in the women's race, seizing the early lead before breaking the tape in 1:41:08.

American Daniel Romanchuk pulled away from compatriot Aaron Pike by the 20km mark, crossing the finish line in 1:26:58 to pick up his second Boston title.