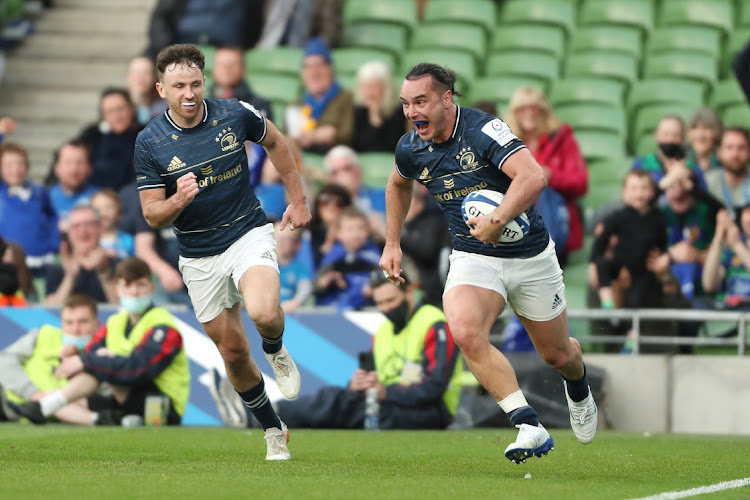 James Lowe of Leinster en route to scoring one of his four tries in their Champions Cup clash against Connaght in Dublin on Friday.
Image: Oisin Keniry/Getty Images

The news that Leinster have left several front-line players at home will ring sweet in the ears of the Sharks and the Stormers but it doesn't mean they won't face the music later in the competition.

While that might boost both SA teams' prospects in the battle for conference honours and qualification for the next stage of the United Rugby Championship (URC) Leinster's decision will almost certainly benefit the most decorated team deeper into the competition.

Leinster coach Leo Cullen is performing a balancing act that requires him to carefully manoeuvre the vast playing resources at his disposal. He has used more than 50 players this season and the team's success in Europe suggests he is particularly adept at mixing and matching.

“It's about the balance you strike over the course of the season and managing the twists and turns,” said the wise and wily coach. “We all had our challenges, especially over Christmas with Covid-19. It's about staying the course.”

Sharks hope for a big boost ahead of Leinster meeting

The Sharks hope to have star fullback Aphelele Fassi back in time before their final push for a place in the United Rugby Championship (URC) ...
Sport
2 months ago

Part of Leinster's success in securing four Champions Cup and eight Pro Rugby (forerunner to the URC) titles has been their ability to operate effectively without their star players when they are on national duty. The Sharks and the Stormers will be well aware of the visitors' depth.

Leinster made sweeping changes to the match-day squad that beat Connacht 56-20 last weekend in Dublin. Prop Andrew Porter and hooker Rohan Kelleher were both included in a 31-man travelling group that features just six of the match day 23 that did duty last weekend.

Cullen has bigger fish to fry after the SA trip when Leinster play a Champions Cup quarterfinal against the resurgent Leicester Tigers.

Cullen is well aware of the calculated risks and ruefully recalled his team's first visit to SA in the Pro14.

“It is such an alien environment for us,” he said about their trip to Bloemfontein. “The time of year dictates what type of squad we bring. There has to be an understanding of where you find yourself in a season.

“The first trip we had there was early in the season and on our next trip our internationals had gone into camp.”

The Currie Cup fixture between the Sharks and Bulls on Saturday has been cancelled due to the floods in KwaZulu-Natal, SA Rugby has confirmed.
Sport
2 months ago

The coach is wary of the Sharks, especially at full strength on their home turf.

“The Sharks are improving all the time, especially when their internationals are back. You go through their team and it is a star-studded line-up. The physical power they bring to the game and the conditions down in Durban are certainly unusual to watch. I haven't been there. You'd look at the weather App on your phone and it is 32 degrees but the humidity makes it look like it's been raining.

“I find the dynamic fascinating with the South African teams on board because of the tradition that they have they will go from strength to strength. There are so many different variables in this tournament which is the beauty of it in many ways.”