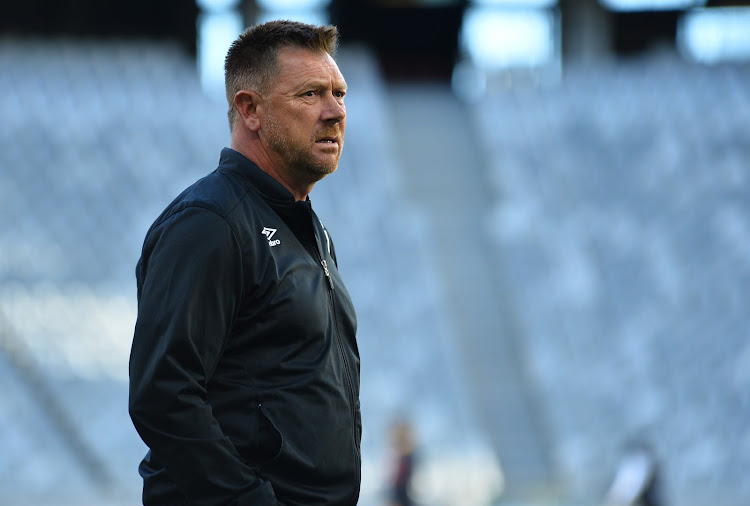 With the DStv Premiership campaign having reached the business end, Cape Town City coach Eric Tinkler says their mission is to push all the way for second place finish.

The team that finishes second on the PSL standings have the privilege of representing the country in the Caf Champions League together with recently crowned champions Mamelodi Sundowns.

Cape Town City held the Brazilians to a 0-0 draw on Wednesday night at Loftus, but the stalemate did not deny Sundowns clinching their 12th PSL league title and an unprecedented fifth in succession.

With Sundowns having wrapped up the season with four matches to spare, the focus turns to who is going to finish second — Royal AM or Cape Town City.

“If we got three points today [Wednesday against Sundowns] we could have closed the gap between us and Royal AM to two,” said Tinkler while also admitting that their fate is not in their hands.

Cape Town City coach Eric Tinkler on their mission for the rest of the #PSL campaign. #DStvPrem pic.twitter.com/L5myr5JkvJ

“We had the two games in hand and we had the opportunity of closing that gap here tonight [Wednesday] to potentially go past Royal AM on the log and go one point ahead.

“Our target at the beginning of the season was to try to finish in the top four and the bonus will be to finish second. Our boys are going to give everything they can to try to achieve that mission of finishing second.

“Right now it doesn’t really lie in our hands, we needed to win tonight against Sundowns to have our fate in our own hands, but we will be relying on others to get the results against Royal AM.”

In their remaining matches, Royal AM have tricky Maritzburg United, Orlando Pirates, Golden Arrows and Sundowns and Tinkler is hoping that they stumble in the run-in.

Cape Town City are still pondering whether to honour their rescheduled DStv Premiership fixture against Kaizer Chiefs at FNB Stadium (3pm) on ...
Sport
3 weeks ago

Looking back at the draw with Sundowns, Tinkler said the two teams cancelled each other out and they didn’t create many chances.

“If you look over the 90 minutes, I think both teams cancelled each other out. I don’t think there were great changes even though we did have one good half chance in the first half with Mdu Mdantsane.

“I think defensively we were well-organised, we were well-structured, they are always a threat with the ball behind to Peter Shalulile, the creativity of Neo Maema, Bradley Ralani and Themba Zwane.

“In the first half they managed to get into the half spaces between our lines, but we spoke about our back four being disciplined and keeping their shape and structure.

“As the only time they looked more threatening was on set pieces, that has been their strength this season and we know that a lot of goals came from set pieces.

“I think it is 24 goals they have scored from set pieces and in their last five games they started off with goals from set pieces. I thought we were exceptional in defending those set pieces, even right at the death.”