Chiefs coach Zwane defends Ngcobo: ‘I believe he was upset with himself’ 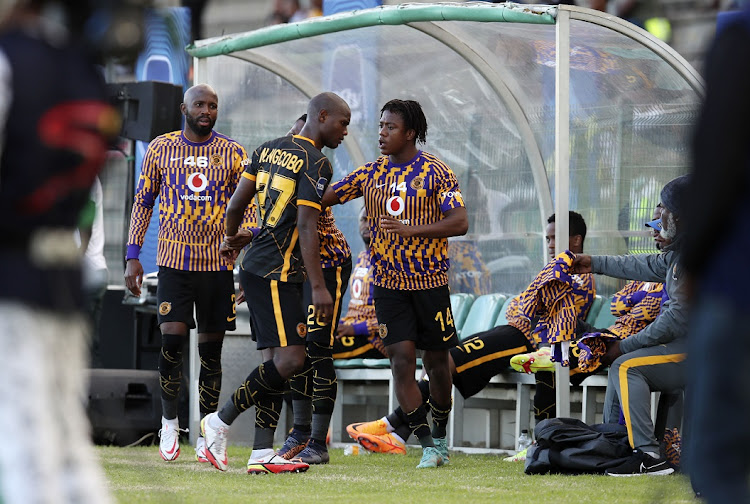 Njabulo Ngcobo of Kaizer Chiefs is calmed by teammates after his argument with goalkeeper-coach Lee Baxter (not pictured) after the player reacted angrily when he was substituted in the DStv Premiership match against Golden Arrows at Princess Magogo Stadium in KwaMashu, Durban on April 27 2022.
Image: Muzi Ntombela/BackpagePix

Kaizer Chiefs coach Arthur Zwane has defended his centreback Njabulo Ngcobo for a tantrum that followed the player's substitution in Amakhosi's 2-1 DStv Premiership defeat to Lamontville Golden Arrows in Durban on Wednesday.

Ngcobo appeared low on confidence and made the costly error with a stray pass that led to Arrows substitute Siboniso Conco's 60th-minute equaliser. Moments later he gave the ball away again, leading to Saziso Magawana curling an effort past the left upright.

Chiefs' co-coaches Zwane and Dillon Sheppard took the defender off, replacing Ngcobo with Daniel Cardoso in the 73rd.

Ngcobo appeared unhappy with the decision, and seemed to shy away from Zwane's offer of a handshake as he came off. Goalkeeper-coach Lee Baxter angrily remonstrated with Ngcobo. After that the player angrily gesticulated and was calmed by teammates.

Ngcobo has come in for criticism on social media, but Zwane felt the defender actually was angry at himself for his mistakes, and the situation got out of hand.

“I believe Njabulo maybe was a bit upset at himself,” Zwane said.

“He gave the ball away in the wrong areas and we were punished. I don't view it as something where other people may see it as bad.

“I don't see it that way. I was a player myself, so I believe he was upset with himself.

“We feel he could have done better. Because we have said you don't play the ball back — try to play the ball forward. Or he was trying to play it short and couldn't see the danger, and we go punished for it.

“As a player you can do that — that's football. Football is a game of mistakes, and a game that teaches us to be better.

“As much as I expected him to do better that was his decision at the end of the day. But we learn from it, and we move on.”

It was not the best defensive afternoon all-round for Chiefs. They conceded Michael Boy Gumede's 86th-minute winner for Arrows softly from a near-post header from a free-kick.

Zwane said Chiefs panicked rather than calmly pressing home the advantage of their 1-0 lead that came from Khama Billiat's 18th-minute strike.

“I'm obviously disappointed. We were in control of the game,” the coach said.

“And then in the second half we decided to give goals away cheaply. With a bit of character it would have been a different story. Arrows didn't pose so much of a threat for us to panic the way we did.

A club of Kaizer Chiefs' stature should create as many scoring chances to win a match as possible, Amakhosi caretaker coach Arthur Zwane said before ...
Sport
2 months ago

“With the dead-ball situation where we conceded, a player just went through them, diving header, and no-one moved.

“We learn from these mistakes. Maybe going forward the players will react differently.”

With matches coming thick and fast, Zwane and Sheppard have had precious little time to implement the more creative style of play they are aiming for in just a few training sessions.

They have limited time again to prepare for Saturday's Premiership match against Cape Town City at FNB Stadium (3pm), a game in doubt as the Citizens have threatened to boycott it.