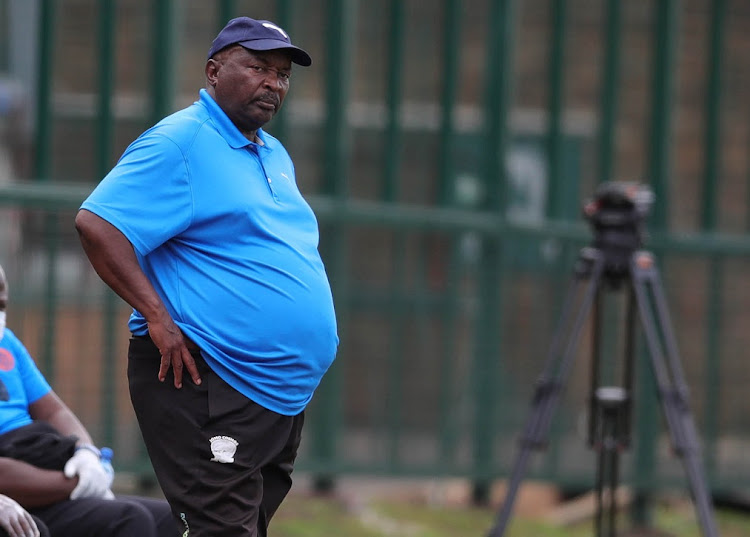 Appearing in a very good spirits despite just being relegated from professional football, Jomo Sono has said he won’t buy a Premier Soccer League (PSL) status in a bid to bring his Jomo Cosmos back to the big time.

One of the most historic football clubs in SA, Cosmos, were relegated from the GladAfrica Championship with two games to play before the end of the season.

This means Ezenkosi will be lost from the professional ranks to the third-tier ABC Motsepe League, an amateur division, as of next season.

However owner of the club and one of the most loved and respected football figures in the country Sono appeared in high spirits after his side’s 1-1 draw with TS Sporting in Tsakane on Saturday as he spoke to the few journalists present to cover the match.

“I’m not going to buy someone else’s status,” Sono said.

“I don’t have a problem with people who do that but I’m not going to do it. If I’m relegated, I’m going to play in the ABC Motsepe League.”

The news that many South Africans had been dreading to hear was finally confirmed on Saturday when Jomo Cosmos were relegated from the professional ...
Sport
1 month ago

Buying your way into the National First Division (NFD) or the DStv Premiership has become a norm in SA.

While Swallows FC won promotion to the top tier from the GladAfrica Championship, before that the consortium behind reviving Moroka Swallows bought the status of Maccabi FC in the second tier.

Bloemfontein Celtic are no longer a professional team because Royal AM bought their top-tier status, while Bidvest Wits ceased operations after their status was purchased by Tshakhuma FC, who then sold it to Marumo Gallants to buy Royal's NFD status.

Royal AM lost their debut match in the Premiership ranks and coach John Maduka put the defeat against Swallows in Soweto on Sunday down to a lack of ...
Sport
10 months ago

The Black Prince, as Sono is affectionately known, bought Highlands Park 39 years ago for R50,000 to form Cosmos.

“Why would I be sad? I’m not sad at all because if I’m relegated, I’m still going to be playing football in the ABC Motsepe League. It’s not like I will be switching to swimming,” Sono said.

“I will still be doing something that I love. As long as it’s football I can even go and play at Kwa Mai Mai.

“The things I have achieved in football are there for everyone to see and no-one is going to erase them. They will always be there.

“I’ve won six trophies but when I bought Highlands Park and formed this club my aim wasn’t to challenge for titles,” he said.

“All I wanted was to develop and sell players. I did that and I will still be developing players even if I get relegated.”