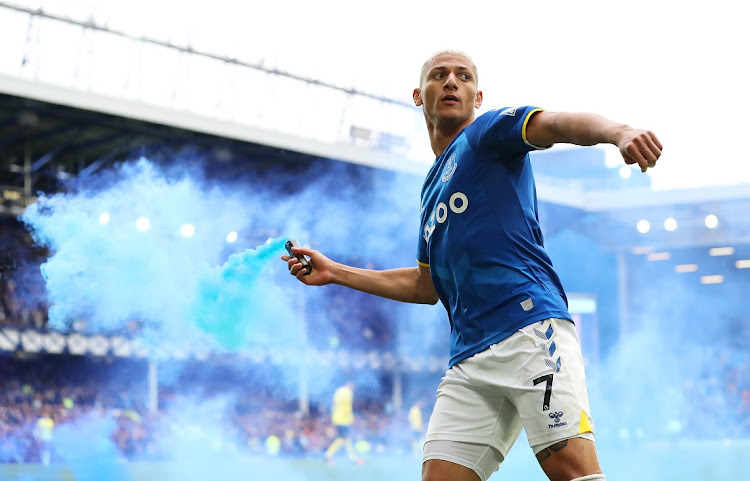 Richarlison of Everton celebrates with a flare after scoring their first goal in the Premier League match against Chelsea at Goodison Park in Liverpool on May 1 2022.
Image: Jan Kruger/Getty Images

Striker Richarlison profited from a Chelsea error to secure struggling Everton a 1-0 Premier League win and what could be a precious three points in their bid to avoid relegation at a rocking Goodison Park on Sunday.

The home side grabbed the lead a minute into the second half after Cesar Azpilicueta gave up possession under pressure from the Brazilian forward, who harried the Chelsea captain into a mistake before slotting a low shot past goalkeeper Edouard Mendy.

Chelsea dominated possession and Everton had to hold on grimly for the final half-hour. They stay in the relegation zone, but move to within two points of Burnley and Leeds United with a game in hand. Chelsea remain third with 66 points from 34 games as they bid to qualify for the Champions League.

The Everton team bus was met by hundreds of fans lined along Goodison Road, flares turning the air blue in what was a vocal show of support for Frank Lampard’s side. Fireworks had also been set off outside the Chelsea team hotel during the night.

SA is too big a football country to eat from the crumbs and Bafana Bafana need to regain their flair and identity if they are to return to the top ...
Sport
1 month ago

“Not many gave us a chance, but we believed and the reception we received before the game was tremendous,” Everton captain Seamus Coleman told Sky Sports.

“This football club means everything to the fans and it’s another three points, but we’re still in a huge scrap.”

The moment the home side so desperately craved came just after the restart as Richarlison, who ran himself into the ground, forced Azpilicueta into the mistake for a goal that was met with an almighty roar.

Left-back Vitaliy Mykolenko should have made it 2-0 shortly afterwards but fired wide, but at the other end Mason Mount struck both posts from a single shot, and Jordan Pickford saved brilliantly twice from Kai Havertz and Antonio Rudiger as Everton clung on.

They had a few chances on the break that came to nothing and at full time were able to celebrate, with much relief, a fourth successive home win against their London opponents.

“We have to be without mistakes, disciplined in your positions and don't make mistakes,” Chelsea manager Thomas Tuchel said.

“When you have that much possession, we did not play our best match but we were in control, and then we gave a goal away and it kills the game for us because it is everything the opponent wants. It is a huge pattern in our season.”