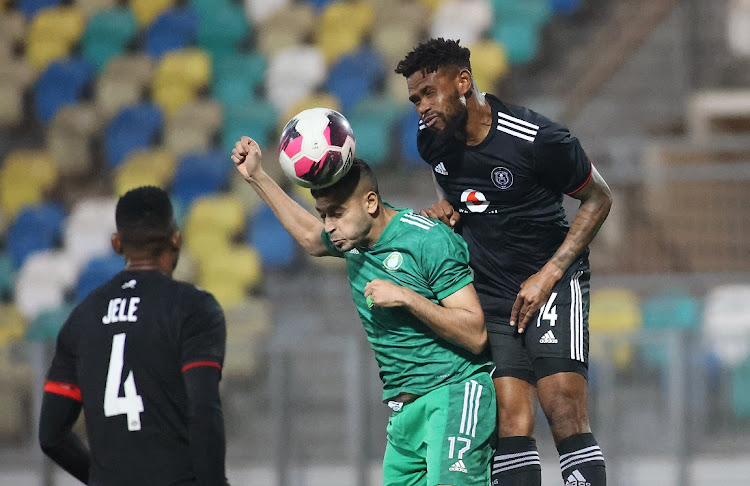 Muetaz Husayn of Al Ahli Tripoli beats Thulani Hlatshwayo of Orlando Pirates to a header in the Caf Confederation semifinal first leg match at the Martyrs of February Stadium in Benghazi, Libya on May 8 2022.
Image: Abbas Farda/BackpagePix

Orlando Pirates, likely finalists in this year's Caf Confederation Cup, will have less than a week to plan and prepare for their trip to Uyo in Nigeria for the last game of the competition on Friday May 20.

After weeks of dilly-dallying, the Confederation of African Football (Caf) finally announced on Wednesday that Akpabio International Stadium in Uyo will host the Confed Cup final.

Pirates lead Al Ahli Tripoli of Libya 2-0 going into Sunday's second leg of their semifinal at Orlando Stadium. The other semifinal is more evenly poised — TP Mazembe of the Democratic Republic of Congo take a 1-0 lead to Morocco where they have to see off RS Berkane.

On Monday Caf announced that Morocco will host the Caf Champions League final for the second year running after Senegal, the only other country that put in a bid, decided to pull out. The city and stadium have yet to be announced for the May 30 final of Caf's premier continental club competition.

Ncikazi on Pirates’ Confed semi away win against Ahli: ‘It’s only half time’

Mandla Ncikazi has cautioned Orlando Pirates against complacency for the second leg of their Caf Confederation Cup semifinal against Al Ahli Tripoli ...
Sport
2 weeks ago

Wydad Casablanca of Morocco and Al Ahly of Egypt are likely to contest the Champions League final after their convincing wins over Petro de Luanda of Angola (3-1 in Luanda) and ES Setif of Algeria (4-0 in Cairo) in the first leg of the semifinals last weekend.

“There are discussions under way within Caf to revert to the old two-legged home and away final to determine the winner of the Champions league, rather than the one-leg final,” Caf said after announcing their decision on Monday.

This was in response to the lack of interested bidders for the 2021-2022 Champions League final.