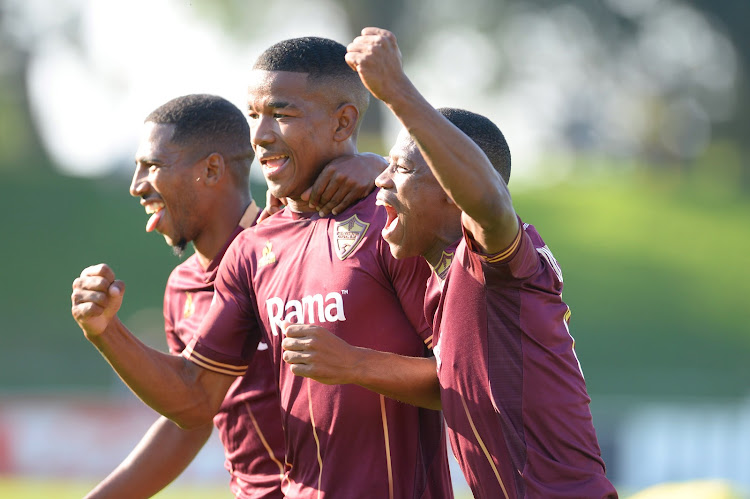 Stellenbosch players celebrate one of their goals against Mamelodi Sundowns at ABSA Tuks Stadium on May 14, 2022 in Pretoria, South Africa.
Image: Lefty Shivambu/Gallo Images)

Stellenbosch beat a strangely lethargic Mamelodi Sundowns 3-0 to cement their place in the top eight on the DStv Premiership standings at the Tuks Stadium in Pretoria on Saturday.

This vital DStv Premiership win for Stellenbosch was secured through a brace of goals from attacker Ashley du Preez and Jayden Adams as they took advantage of some sloppy defending by Sundowns.

Sundowns goalkeeper Ricardo Goss and his defenders Grant Kekana, Mosa Lebusa and Khuliso Mudau did not have a good day at the office as they were given all sorts of problems by the speedy Stellenbosch attackers.

Kiazer Chiefs have been found guilty of fielding ineligible players in their DStv Premiership match against Sekhukhune United by the Premier Soccer ...
Sport
1 week ago

Stellenbosch joined AmaZulu and Maritzburg United as the only three teams who have managed to beat this rampaging Sundowns side that has already won the league.

Stellenbosch opened the scoring after six minutes through Du Preez who was injured in the process of putting the ball in the back of the net but recovered to continue with the match.

Stellenbosch increased their lead through Jayden Adams who showed awareness to loop the ball over the head of the suspect Goss who was out of his line.

Teko Modise fancies Jali, Zwane or Shalulile for player of the season

Stellenbosch stretched their lead further shortly before the hour mark when Du Preez registered his second of the match after he outran Kekana and Lebusa before beating Goss.

In the other crucial match of the afternoon, Kaizer Chiefs refreshed their chances of qualifying for the Caf Champions League with a hard fought 1-0 win over Sekhukhune United at Ellis Park.

Chiefs’ goal was scored by a towering header by defender Ramahlwe Mphahlele in the 38th minute after Sekhukhune United defenders failed to clear a set piece.

Because of this win, Amakhosi remain in the hunt for a place in the Champions League or Confederation Cup where they are battling with Cape Town City and Royal AM.