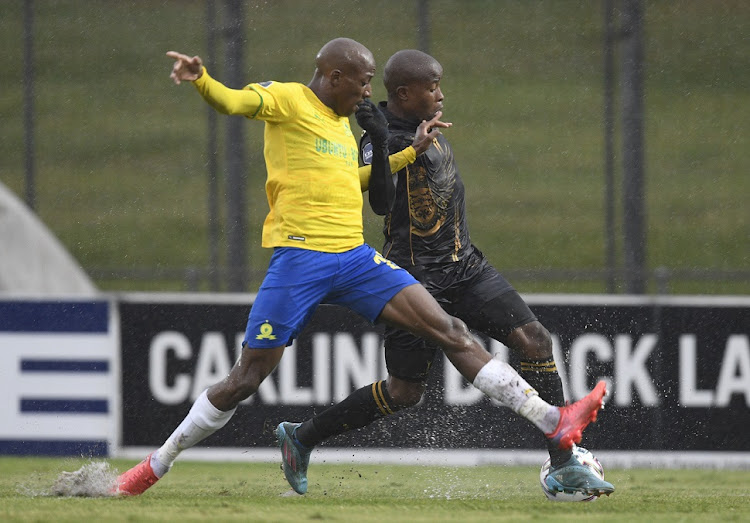 Thabo Matlaba of Royal AM is challenged by Khuliso Mudau of Mamelodi Sundowns during their DStv Premiership match at Chatsworth Stadium.
Image: BACKPAGE/ SYDNEY MAHLANGU

Their DStv Premiership game against Royal AM at the Chatsworth Stadium in Durban on Saturday was called off due to a waterlogged pitch.

The rain started pouring in Durban on Saturday morning and by the time the match kicked off, the pitch was unplayable with water puddles all over this venue with a poor drainage system.

After ending the match midway through the first half, PSL media officer Fhatuwani Mpfuni announced that a new date and kickoff time will be revealed in due course.

Sundowns confirmed winning a record-extending fifth successive league title with four games to spare and were set to be given their trophy and medals after the match in Durban on Saturday.

The Brazilians had collected 62 points in 29 matches, of which they won 18, drew eight and lost three ahead of their final match against Royal.

For Royal, the agony of waiting for their confirmation of whether they’ll finish in second or third place on the PSL log and qualify to play in one of the Caf competitions next season continues.

Royal came to Saturday’s match with a match in hand after their league tie against Orlando Pirates was postponed last week due to the latter being involved in the Caf Confederation Cup.

It remains to be seen whether the PSL will decide to reschedule this match before Saturday’s Nedbank Cup final in which Sundowns will play Marumo Gallants at the Royal Bafokeng Palace.

The whole of SA must get behind Pirates, says Downs coach

Sundowns will complete a domestic treble if they win the final on Saturday.

The other match to be abandoned on Saturday due to poor weather was between AmaZulu and Golden Arrows at the Moses Mabhida Stadium and the league is also expected to announce a new date and kickoff time for this game.