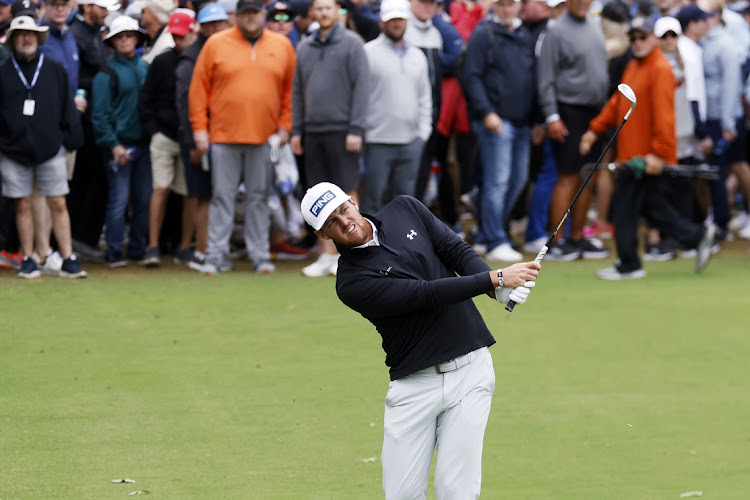 Mito Pereira of Chile in action on the ninth hole in the third round of the 2022 PGA Championship at Southern Hills Country Club in Tulsa, Oklahoma on May 21 2022.
Image: EPA/ Tannen Maury/ BACKPAGEPIX

Unheralded Mito Pereira became the first Chilean to lead a major, surging three shots clear at the top of the PGA Championship third-round leader board on Saturday, while Tiger Woods withdrew after sinking to the bottom of table.

Playing in just his second major, Pereira has refused to surrender to pressure carding a one-under 69 to get to nine-under 201 and a three-shot advantage on Britain's Matt Fitzpatrick and American Will Zalatoris going into Sunday's final round at Southern Hills Country Club.

Woods has played nearly 100 majors and won 15, but the PGA Championship in Southern Hills was just the second in his comeback from a car crash 15 months ago that nearly resulted in the amputation of his right leg. The toll that effort has taken reached a head on Saturday as a hobbled Woods grimaced his way to a nine-over 79, his third-worst score ever at a major.

The dejected 46-year-old trudged off the 18th green with the PGA of America confirming five hours later he had withdrawn.

“Tiger Woods has informed us that he is withdrawing from the 2022 PGA Championship,” PGA of America President Jim Richerson said in a statement. “We admire Tiger’s valiant effort to compete here at Southern Hills and wish him the best as he continues to recover from his injuries.”

With Woods long gone, Pereira started his work one back but found himself alone at the top after two holes when overnight leader Zalatoris bogeyed the first and he picked up a birdie at the second.

The 27-year-old would extend his lead to four before a mid-round wobble that saw him absorb four bogeys over a five-hole stretch around the turn. But with his lead chopped to one, Pereira responded with back-to-back birdies at 13 and 14 before closing out his round in style, rolling in 27-footer at the last.

“It's by far the biggest tournament I played, the biggest round of golf and tomorrow is going to be even bigger,” said Pereira, who missed the cut in his only other major the 2019 US Open.

“I just try to keep it simple, try to do the same things that I've been doing, try to not even look at the people that's around me.”

When the day began Fitzpatrick was heading in the wrong direction with bogeys on his opening two holes but would have just one the rest of the way while notching six birdies, including a pair to end his round for a 67.

The Masters officially gets underway on Thursday when Jose Maria Olazabal hits the opening tee shot but for many golf fans the year's first major ...
Sport
2 months ago

Second round leader Zalatoris never managed to heat up on a cold day in Oklahoma, taking four bogeys on his outward nine on was to a three-over 73. Cameron Young also had a 67 to lurk four off the lead. Pereira, Fitzpatrick, Zalatoris and Young are all in pursuit of their first PGA Tour win.

After dealing with heat and gusting winds through the opening two rounds, golfers faced dramatically different conditions on Saturday as rain and cold settled in over Tulsa. With temperatures hovering around 32 °C players sweated out a wind-whipped second round, but on Saturday with temperatures in the at 10-15 °C mitts, sweaters and umbrellas were the order of the day.

First round leader Rory McIlroy's hopes of ending an eight-year major drought faded as the Northern Irishman was dragged down the leader board with a four-over 74, falling nine back of the leader. McIlroy, a two-time winner of the PGA Championship, was far from the only big name to labour in the miserable conditions.

US Open champion and world No.2 Jon Rahm slumped to a 76 while British Open winner and world No.3 Collin Morikawa signed for a 74.