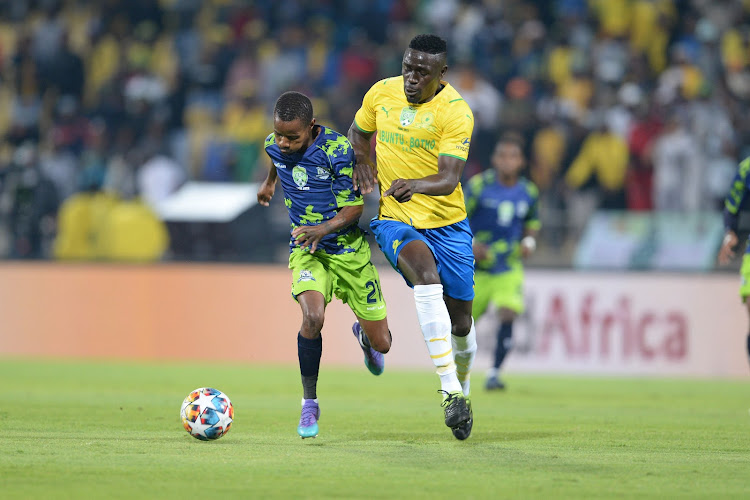 Mamelodi Sundowns took their dominance of SA football to another level when they defeated Marumo Gallants 2-1 to be crowned Nedbank Cup champions at Royal Bafokeng Stadium in Rustenburg on Saturday night.

Free-scoring striker Peter Shalulile and Thapelo Morena scored for Sundowns while Junior Dion was on the scoresheet for Gallants after 120 minutes of play.

The victory saw the Tshwane giants complete a clean sweep of trophies in domestic football this season and win a treble.

Gallants had the toughest mission in SA football right now: to stop the well-oiled Sundowns from winning all the titles that were on offer in the Premier Soccer League (PSL) this season.

Sundowns had already won the lucrative MTN8 and the DStv Premiership title without any real challenge.

Mamelodi Sundowns striker Thabiso Kutumela has urged his teammates not to underestimate Marumo Gallants during their Nedbank Cup final at the Royal ...
Sport
4 weeks ago

In all honesty, not many would have backed Gallants to deny Sundowns the treble even though this tournament is known for its upsets which have seen smaller teams beating the big guns in the climax.

But Gallants coach Dan Malesela, who has won this cup with TS Galaxy before, would have expected his boys to go out at Royal Bafokeng and give it their all.

Gallants did just that as both teams delivered an entertaining match, with no team sitting back and hoping to score on a counter.

Sundowns almost broke the deadlock after four minutes of play when Gaston Sirino launched a missile towards Gallants’ goalposts, but the experienced goalie Washington Arubi produced an excellent save.

Sundowns kept knocking in their mission to get an early goal, but when Thabiso Kutumela, who was in a good position to go for goal, set up Khuliso Mudau in the box, the latter ballooned his effort.

The men from Limpopo also had a few goes at Downs with their skilful and pacy attackers such as Ndabayithethwa Ndlondlo and Joseph Molongane.

However, they never really managed to trouble goalkeeper Tapuwa Kapini as they couldn’t break through Masandawana’s solid defence.

Sirino might have thought he had scored on 21 minutes when he successfully found the back of the net, but match referee Masixole Bambiso ruled out the goa due to a foul in its build-up.

The entertaining first half finally produced a goal after 33 minutes of play when Shalulile scored to give Sundowns a lead.

Malesela’s charges kicked off the second half by throwing everything at Sundowns in search of an equaliser.

Mweene was finally called into action when he had to save Ndlondlo’s dangerous effort three minutes into the final stanza.

Seeing things weren’t working out for his side Malesela brought in attacking midfield Junior Dion for defender Lobogang Mabotja.

The Ivory Coast player Dion spent only two minutes on the field before he sent a section of the stadium into a frenzy when he scored on 75 minutes, with Ndlondlo chipping in with an assist.

Sundowns, who had been under pressure for a few minutes, ran towards the assistant referee to protest while their co-coach Rulani Mokwena also charged towards the fourth official.

With no team being able to find the second goal for a victory, the was forced to head to extra time where Gallants were reduced to 10 men when Ndlondlo was red-carded.

Morena, who played off the bench, gave Masandawana their treble on 120 minutes.

Despite the loss, Gallants are going to represent SA in the Caf Confederation Cup as Sundowns will be playing Champions League football.