Blitzboks bounce back from Toulouse disappointment, into London quarters 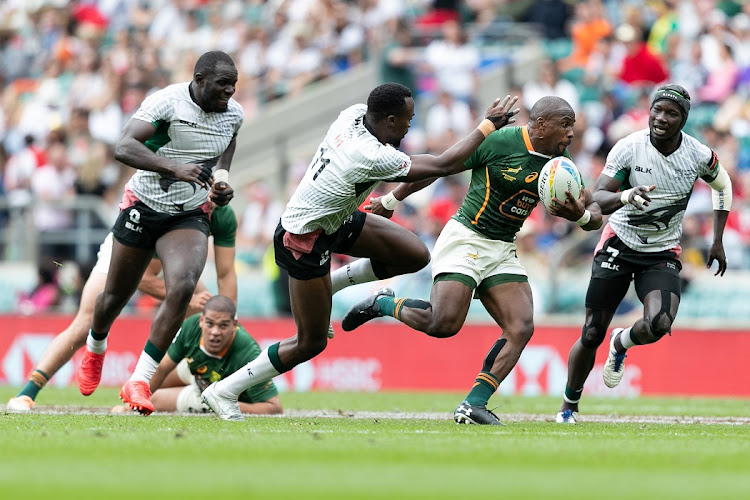 SA captain Siviwe Soyizwapi in the match against Kenya on day 1 of the HSBC London Sevens at Twickenham in London on May 28 2022.
Image: Juan Jose Gasparini/Gallo Images

The Springbok Sevens team bounced back from their disappointment in Toulouse last weekend by winning all three of their pool games at the HSBC London Sevens at Twickenham on Saturday, booking their spot in the cup quarterfinals.

They will face Australia in the top eight on Sunday.

The Blitzboks used their speedsters well in their opening game against Argentina, who overtook the South Africans at the top of the HSBC World Rugby Sevens Series standings last week, beating the men from South America by 26-19.

The Blitzboks made it three from three in their final pool game, beating Kenya 24-21.

Impi Visser, Human and Du Plessis scored in the first half.

After a disappointing 28-17 defeat to Samoa in the Cup quarterfinals of the HSBC Canada Sevens, the Springbok Sevens team bounced back with two ...
Sport
2 months ago

After the Central Africans staged a comeback to 19-14, SA captain Siviwe Soyizwapi all but sealed the win for his team with a late try before Kenya got a consolation score at the death. Brown again converted two tries.

“It was a good day, results wise, for us,” said Soyizwapi.

“There is always something to work on. We never have a perfect game and today was another example of that.

“We made some mistakes, but we did come out to make ourselves and the jersey proud and we achieved that, I feel.”

In Toulouse last weekend SA lost 24-21 to Scotland in the ninth-place semifinal, having lost to Ireland and Samoa in their pool. Their only victories were against Spain and Japan, and they had their worst finish since coach Neil Powell took charge back in 2013.