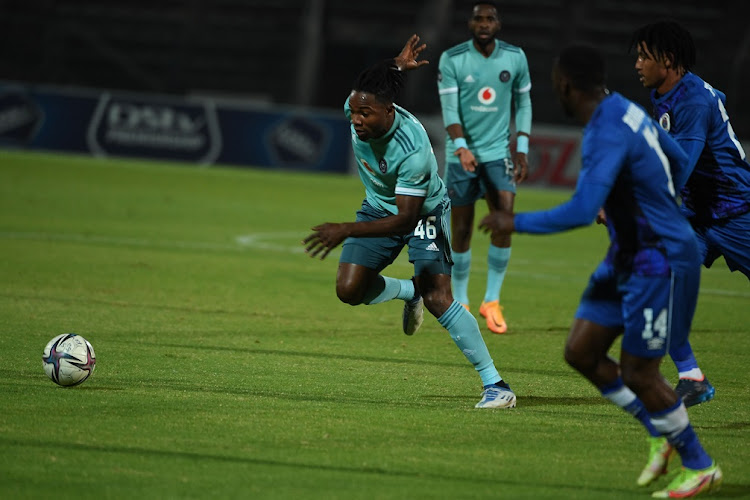 Kwame Peprah of Orlando Pirates during the DStv Premiership match against SuperSport United at Lucas Moripe Stadium in Pretoria on May 30 2022.
Image: Lee Warren/Gallo Images

Orlando Pirates wrapped up one of the seasons they will want to forget quickly with a 2-0 DStv Premiership defeat to SuperSport United at Lucas Moripe Stadium on Monday night.

It was the last match of the 2021-22 season after the Buccaneers needed to catch up due to reaching the Caf Confederation Cup final.

The Buccaneers did not win a single trophy this season and were also beaten on penalties by Moroccan club RS Berkane in the Confed final two weekends ago. Not only have they failed to get a Caf club competition spot for next season, they also finish below their bitter rivals Kaizer Chiefs — something that is surely going to irk their supporters.

For Matsatsantsa a Pitori, the victory was sweet in the sense that it took them into the top eight, nudging Golden Arrows, who had occupied eighth position, out of next season’s MTN8.

United have had a difficult season and had to part ways with coach Kaitano Tembo after a spell of unimpressive results. They have also had to do without key players Teboho Mokoena, Sipho Mbule and Bradley Grobler.

Mokoena joined neighbours Mamelodi Sundowns in the middle of the season while star midfielder Mbule spent more time in disciplinary hearings than he did on the field. He is still suspended by the club. Grobler struggled with injuries throughout the season and only played a cameo role.

When the other teams played their last round of matches, Pirates had three games in hand and if they had won all of them they would have snuck into second place and next season’s Caf Champions League.

When they returned from the final in Nigeria they sent a strong statement of intent when they spanked Maritzburg United 4-1. But the wheels came off against Royal AM last Friday when they were held to a 2-2 draw.

Pirates dominated possession in the first half against SuperSport and were breaking down the United rear guard with ease. But they wasted numerous scoring chances, like when Kwame Peprah turned beautifully inside the box but his shot dented the upright.

United had chances of their own as they also piled pressure on their opponents. The pressure paid off when Fortune Makaringe bamboozled his own goalkeeper with a well-taken own goal to open the scoring.

Thamsanqa Gabuza continued to torment his former club and earned them the penalty that got Matsatsantsa the three points. He was pushed inside the penalty area by Bucs skipper Happy Jele who was given his marching orders by referee Luxolo Badi. Gamphani Lungu converted from the spot kick to make it 2-0.